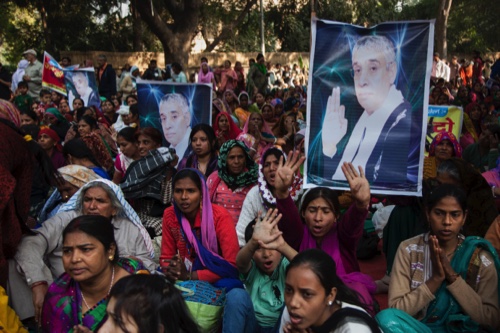 Supporters of controversial Indian guru Sant Rampal displaying his photographs, chant slogans praising him as they gather to show support at a protest venue near the Indian Parliament in New Delhi

The bodies of four women were found inside an Indian guru’s heavily fortified ashram, police said yesterday, a day after security forces tried to storm the sprawling complex and arrest the spiritual leader.
Sant Rampal, 63, is believed to be holed up inside the compound in Haryana state, protected by thousands of devotees, many of them armed, according to police. Nearly 200 people were injured Tuesday as riot police tried to force their way into the ashram.
Rampal is wanted by police for questioning in a 2006 murder case.
As of yesterday afternoon, police had not managed to enter the 5-hectare complex. Shriniwas Vashisht, director-general of police in Haryana, said the bodies of four women were handed over to authorities from inside.
It was not clear how the women died. Autopsies were being conducted, he said.
Vashisht said thousands of people were pouring out of the ashram yesterday, including many who apparently had been held against their will, but that 5,000 to 6,000 still remained inside.
Rampal and 38 others were charged with murder and other offenses after a violent clash between his supporters and another group killed one person in July 2006. He was freed on bail, which was canceled in July after his followers entered a courtroom and threatened lawyers.
Since 2010, Rampal, an engineer-turned-guru, has ignored 43 court summonses, seeking exemptions each time. The court set a final deadline for him to appear in court on Monday, which he also ignored.
Rampal’s supporters say he is too ill to make the 250-kilometer journey from his ashram in Haryana’s Hisar district to the court in the state capital, Chandigarh.
Thousands of police and paramilitary troops have erected barricades on the road leading to the ashram. People leaving the compound were being searched and questioned before being dropped at bus and train stations to return to their homes, officials said.
Several people who left the ashram said Rampal’s armed supporters had attempted to stop them.
“They closed and locked the gates inside the compound and would not let us out,” said Birender Satya, who had traveled from central India with his mother to listen to Rampal’s preaching.
Police said a group of armed supporters was detaining women and children in the ashram to act as human shields.
“They know that we will not allow innocent women and children to be caught in the crossfire and they are taking advantage of that,” Vashisht said.
Police appealed to Rampal to give himself up so no more lives are lost. Nirmala George, New Delhi , AP