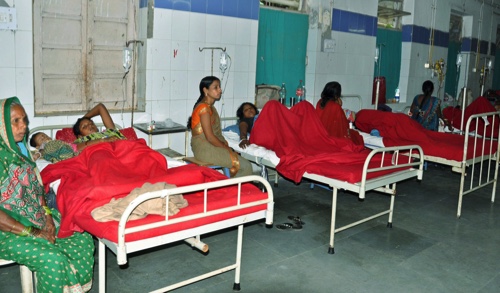 Indian women who underwent sterilization surgeries receive treatment at the CIMS hospital in Bilaspur, in the central Indian state of Chhattisgarh

A team of doctors rushed to central India yesterday after at least 12 women died and dozens of others fell ill following sterilization surgery held as part of a free, nationwide program aimed at limiting births in the world’s second-most populous nation, officials said.
The case highlights the risks women face in reproductive health in a country struggling with high population growth and widespread poverty.
A total of 83 women, all villagers under the age of 32, had the operations Saturday as part of the federal government’s free sterilization campaign and were sent home that evening. But dozens later became ill and were rushed in ambulances to private hospitals in Bilaspur, a city in central Chhattisgarh state.
By yesterday morning, at least 12 women had died, officials said.
The apparent cause of death was either blood poisoning or hemorrhagic shock, which occurs when a person has lost too much blood, state deputy health director Amar Singh said, though the preliminary results from autopsies were expected to be released yesterday.
Dozens of the women were still hospitalized yesterday, including some in critical condition. “Their condition is very serious. Blood pressure is low,” said Dr. Ramesh Murty at CIMS hospital, one of the facilities where the sick women were taken.
The Chhattisgarh state government sent a plane to New Delhi overnight to pick up a team of four doctors “to ensure no time is lost” in treating the patients, Indian Health Secretary Lov Verma told Press Trust of India.
India’s government — long concerned about pervasive poverty among its rapidly growing 1.3 billion population — performs millions of free sterilizations to both women and men who want to avoid the risk and cost of having a baby. The vast majority of patients are poor women who are usually paid a one-time incentive fee to undergo the surgery of about USD10-20, or about a week’s pay for a poor person in India. About 180 million people in the country still live on less than $1.25 a day.
India has one of the world’s highest rates of sterilization among women, with about 37 percent undergoing such operations, compared with 29 percent in China, according to 2006 statistics reported by the United Nations. About 4.6 million Indian women were sterilized in 2011 and 2012, according to the government.
The women who underwent surgery on Saturday were each paid about $10, and all 83 surgeries were performed within six hours, the state’s chief medical officer, Dr. S.K. Mandal, told The Associated Press by phone.
“That is not usual,” he said, but declined to comment further until the autopsies determine exactly what went wrong.
The state suspended four government doctors, including the surgeon who oversaw the operations and the district’s chief medical officer.
“It appears the incident occurred due to negligence” by doctors, Chhattisgarh Chief Minister Raman Singh said, before urging patience for the autopsy results. He also said the victims’ families would each receive a compensation payment of about $6,600. Katy Daigle, New Delhi , AP