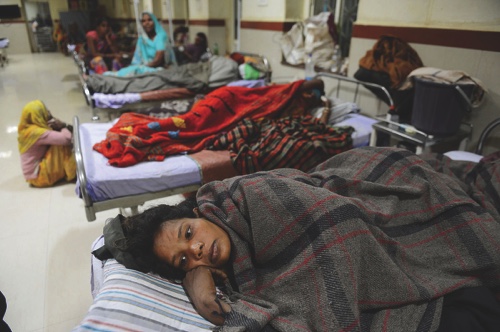 A woman who recently delivered a baby lies on a bed at a hospital in Shivpuri, in central Madhya Pradesh

Eight women died of infection and 68 others are hospitalized following sterilization surgery as part of a government-sponsored campaign in the central Indian state of Chhattisgarh, a state medical official said.
The women became infected after doctors at a private hospital conducted 83 surgeries over about six hours on Nov. 8, Amar Singh Thakur, chief health officer for Bilaspur district, said by phone. The eight died Monday while as many as five are in critical condition, he said.
“The deaths were due to infection causing septic shock,” Thakur said. “We are investigating but it is too early to say that it was due to sterilization.”
State governments routinely carry out one-day sterilization drives for family planning in the world’s second-most populous country. India has the world’s third-highest female sterilization rate after the Dominican Republic and Puerto Rico among more than 180 countries tracked by the United Nations.
“This is an exceptional case which unfortunately happens once every four or five years,” said Abhijeet Phatak, medical program specialist with International Planned Parenthood in New Delhi. “The fault lies with the person who did not disinfect the equipment on a day when 80 or 90 women are being sterilized. But also the strategy of having one-day camps for sterilization is to blame and should be reconsidered.”
While cash incentives are offered to couples who stay childless until prescribed ages or opt for contraceptives, the use of numerical targets has contributed to a “coercive environment for several decades,” Human Rights Watch said in a 2012 report. Although the federal government has announced a “target-free” approach to family planning, district health workers are threatened with salary cuts or dismissals if local targets aren’t met, according to the report.
India’s National Family Health Survey in 2005-2006 showed that about 37 percent of married women have been sterilized while only 1 percent of men have had a vasectomy. About 230,000 women between the ages of 15 to 49 and men aged 15 to 54 were interviewed throughout India.
About 29 percent of Chinese women surveyed around the same time had been sterilized compared with 4.5 percent men, according to UN data. The vasectomy rate compares with about 24 percent in Canada and 11 percent in the United States.
India’s population policy, formulated in 2000, called for more vasectomies, which have been found to be medically safer. It also offers 500 rupees (USD8) to women who have their first child after the age of 19, up to 5,000 rupees as health insurance for those who live in poverty and have chosen to be sterilized with no more than two living children, and accident insurance cover for the individual undergoing the surgery.
About half of Indian women marry before the legal age of 18 and around 33 percent of births occur at intervals of less than 24 months, contributing to a high infant mortality rate, according to the policy document. Indians have more children as “insurance” against these deaths and a preference for boys leads to malnourished girls and women, the report showed.
India was the first country in the world to start a family planning program, which began in 1952. Unni Krishnan , Bloomberg