India | Girls died by suicide, not slain by rapists 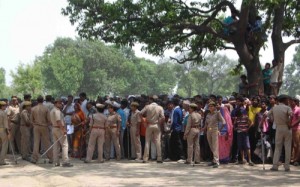 In this May 31, 2014, file photo, Indian policemen cordon off the area as villagers and others look toward the tree where two teenage girls were found hanging in Katra village in the northern state of Uttar Pradesh

An investigation into the deaths of two teenage girls believed to have been raped and hanged by their attackers concluded that the two actually committed suicide, news reports said yesterday.
Ranjit Sinha, the head of the Central Bureau of Investigation, India’s version of the FBI, told the Hindustan Times that the local police’s probe into the deaths was conducted “erroneously.”
“Our probe found that the girls had committed suicide and weren’t murdered,” he told the newspaper. He gave no other details.
Six months ago, visuals of the girls’ bodies hanging from a tree in their tiny home village of Katra in Uttar Pradesh state, had shocked the country long inured to violence against women.
Tens of thousands of people took to the streets to demand justice for the girls in scenes that were reminiscent of the public outrage that followed the December 2012 fatal gang rape of a 23-year-old woman aboard a moving bus in New Delhi, India’s capital.
At the time the local police had said that the girls were gang-raped and murdered. Five men had been arrested in connection with the deaths but later freed on bail.