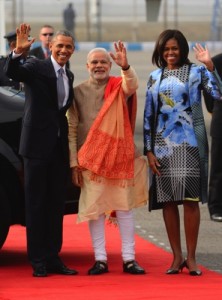 President Barack Obama was greeted in India yesterday with an elaborate welcome at the country’s sprawling presidential palace, then he solemnly laid a wreath at a memorial honoring the father of India’s independence movement, Mahatma Gandhi.
The president arrived in New Delhi under hazy skies yesterday morning. Indian Prime Minister Narendra Modi was waiting for Obama at the steps of Air Force One and the two men shared a hug, underscoring the warm relationship they have formed in the short time Modi has been in office.
The president and prime minister were to spend much of yesterday holding talks on climate change, defense and economic ties. Today, Obama was to be the guest of honor at India’s Republic Day festivities, making him the first U.S. president to attend the anniversary of the enactment of country’s democratic constitution.
“It is a great honor,” Obama said after reviewing an Indian honor guard formation at Rashtrapati Bhavan, the presidential palace. “We are so grateful for the extraordinary hospitality.”
Following their meetings, Obama and Modi were to issue statements and address reporters.
A massive security presence was in place for Obama’s visit, with numerous roadblocks and armed men lining the streets.
While much of Obama’s trip here was to be symbolic, the White House was seeking to make progress on numerous policy matters. Relations between the U.S. and India have been strained in recent years, but have been improving since Modi took office last year. Julie Pace, White House Correspondent, New Delhi, AP