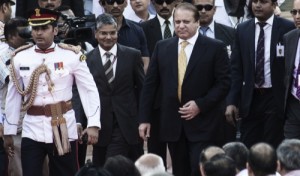 Indian Defense Minister Arun Jaitley warned Pakistan that it will face a heavy military response if it continues attacks along the disputed border of the nuclear-armed powers.
“Pakistan is the aggressor,” Jaitley told reporters in New Delhi yesterday. “If Pakistan persists with this adventurism, our forces will make the cost of this adventurism unaffordable for Pakistan.”
Pakistan Prime Minister Nawaz Sharif will meet his top security advisers today as the death toll from the worst border clashes with India in more than a year climbed to at least 14. Both sides blame each other for starting the fight.
The latest bloodshed may further derail efforts to mend relations between the countries marred by decades of mistrust and terrorist attacks. Optimism spurred by Sharif’s attendance at Indian Prime Minister Narendra Modi’s inauguration in May dissipated in August, when India scrapped formal talks after a Pakistani diplomat met with Kashmir separatists.
“There is no immediate likelihood of these clashes escalating into a war, but this is extremely debilitating, not only for peace between the two countries but also for peace in the region,” Imtiaz Gul, executive director of the Center for Research and Security Studies in Islamabad, said in a phone interview. “As long as this is happening, talks are likely to remain stalled.”
Sharif’s administration hasn’t had direct contact with Modi’s government since the shooting began, Sartaj Aziz, Pakistan’s adviser on foreign affairs, said Wednesday in a phone interview. Pakistan will decide its next course of action after the meeting today, he said.
“At this point, we are monitoring the situation and analyzing it,” Aziz said.
Ten Pakistani civilians were killed and at least 40 wounded in the first three days of fighting, according to a Pakistan military official who asked not to be identified because he’s not authorized to speak with the media. Another two people were killed in Pakistan by Indian forces firing across the border, Pakistani Samaa news channel reported, without saying where it got the information.
“The Modi government is very keen to ensure that it is not seen as soft on Pakistan,” Kanti Bajpai, vice dean of research at the Lee Kuan Yew School of Public Policy, said in Singapore. “In Pakistan, too, the government and army does not want to appear to be soft on Kashmir after Nawaz Sharif’s visit to India at Modi’s inauguration.” N.C Bipindra and Kamran Haider, Bloomberg