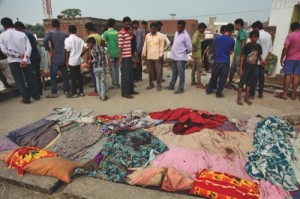 Indian villagers gather near bed sheets stained with blood in alleged firing from Pakistan’s side, at Masha da kothe village, in Arnia Sector near the India-Pakistan international border

Tens of thousands of villagers were fleeing their homes in Kashmir yesterday, as Indian and Pakistani troops bombarded each other with gunfire and mortar shells over the border separating Pakistan from India’s portion of the disputed region. At least nine civilians were killed.
Indian officials said the flare-up left five villagers dead, including one child, and 35 injured on the Indian side of the border. The Pakistani army reported four civilians killed on its side, including two children, and three injured.
Yesterday’s violence — one of the worst violations of a 2003 cease-fire between India and Pakistan — followed several meetings between the commanders of the two countries’ border forces aimed at calming tensions. Two of the three wars between the enemy nations have been fought over competing claims to Kashmir, though the 2003 cease-fire has largely held despite small but regular skirmishes.
Each side accused the other of firing first before dawn, and each said its troops had only retaliated. Both sides said the violence was happening at several points along the border, including the designated frontier dividing Pakistan from the Indian-held Kashmir region of Jammu, as well as the U.N.-monitored line of control that slices through the mountainous region and divides it into an Indian-controlled portion and a Pakistan-administered territory.
“First we heard gunshots,” said Akshit Kumar, a resident of Arnia, a town in Indian-controlled Kashmir. “But as the shelling started, that’s when we decided to flee.”
On the Indian side, officials were evacuating tens of thousands of people from Arnia and nearby villages to underground bunkers and government shelters.
A man said he was sleeping on the lawn outside his home on the outskirts of Arnia when a mortar shell landed and exploded on a nearby house, killing his neighbor and wounding five other people.
“There is panic,” said Jammu’s top administrator, Shantmanu, who goes by one name. “We’re trying to give them a sense of security and temporary shelters.”
Many saw the chaos as part of what’s become a predictable cycle of violence in a region riven by decades-old animosities. A similar outburst of cross-border violence in August led about 15,000 villagers to flee temporarily.
Indian officials regularly accuse Pakistan of waging violence as a cover for separatist militants to infiltrate into the Indian side. Pakistan staunchly denies this, saying it offers only moral and diplomatic support to the militants and to Kashmiris who oppose Indian rule.
“They want to push more militants. We are keeping the utmost vigil,” Indian army spokesman S.D. Goswami said. Aijaz Hussain, Srinagar, AP