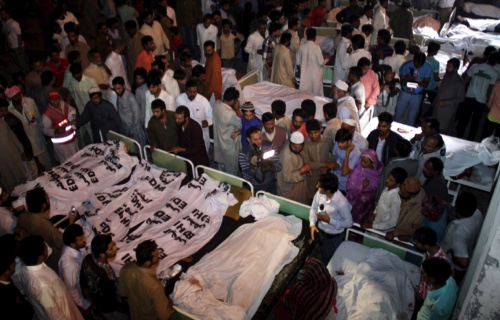 Pakistanis gather to identify bodies of their relatives killed in a bomb blast, at a local hospital in Lahore

A suicide bombing at the busiest India-Pakistan border crossing after a nightly flag-lowering ceremony Sunday killed at least 53 people, according to the state-run Pakistan Television channel.
The attack in Pakistan about 500 meters from the Wagah border post near Lahore occurred as visitors returned from the ceremony, which drew as many as 8,000 people. The Tehrek-e-Taliban Pakistan JamaatulAhrar, a splinter group of the Pakistani Taliban, took responsibility for the blast and said more attacks would be coming.
“This attack is the revenge of the killing of those innocent people who have been killed by Pakistan Army, particularly of those who have been killed in North Waziristan,” Ehsanullah Ehsan, a spokesman for the group, said in an e-mail.
The suicide bombing is the first major terrorist strike since Pakistan’s army started an operation in June to root out Taliban militants in North Waziristan along the Afghan border. The bombing prompted India and Pakistan to suspend trading from the border post for at least two days, the Times of India reported on its website, citing custom officials.
Rana Sanaullah Khan, a spokesman for Punjab province and a member of Prime Minister Nawaz Sharif’s ruling party, said the government hadn’t determined who was responsible.
Television images showed a line of caskets with white sheets covering them in a row outside of the hospital. Ambulances wailed as eyewitnesses spoke about how the blast hit them after they attended the parade.
“If he had managed to explode close to the border, the dimensions would have been different,” Tahir Javed Khan, director-general of the Pakistan Rangers, a paramilitary force, told state-run Pakistan Television channel, or PTV. “Different because on the one side there is us, and on the other there is India. The death toll remained limited because a majority of the people had left.”
Security was tightened around Punjab, with extra police and paramilitary troops deployed across the province, PTV reported, citing Punjab Law Minister Mujtaba Shuja-ur-Rehman.
The blast occurred at about 6:15 p.m. local time, Ashok Kumar, India’s inspector general of the Border Security Force, said by phone.
“Our side is safe,” Kumar said. “Still we are on alert, maintaining extra caution. There is no need to panic.” Khurrum Anis  , Bloomberg