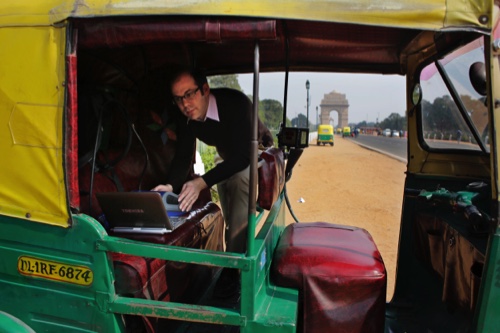 The three-wheeled rickshaw lurched through New Delhi’s commuter-clogged streets with an American scientist and several air pollution monitors in the back seat. Car horns blared. A scrappy scooter buzzed by belching black smoke from its tailpipe. One of the monitors spiked.
Joshua Apte has alarming findings for anyone who spends time on or near the roads in this city of 25 million. The numbers are far worse than the ones that have already led the World Health Organization to rank New Delhi as the world’s most polluted city.
Average pollution levels, depending on the pollutant, were 50 percent to 8 times higher on the road than urban background readings, according to research by Apte and his partners at the University of California, Berkeley, and the Indian Institute of Technology in New Delhi.
“And you have to keep in mind that the concentrations at urban background sites, where these official monitors are, are already very high,” he said. The measures “are actually some of the highest levels in air pollution made inside vehicles anywhere in the world.”
The point is particularly important for New Delhi residents, about half of whom live within 300 meters of a major road. New Delhi, like most cities, places their air monitors far from primary pollution sources like highways or industrial plants so that no single source can affect ambient readings, which are meant to represent an average pollution exposure from all sources.
“Official air quality monitors tend to be located away from roads, on top of buildings, and that’s not where most people spend most of their time,” Apte said as The Associated Press joined him on a pollution-monitoring ride-along. “In fact, most people spend a lot of time in traffic in India. Sometimes one, two, three hours a day.”
Outdoor air pollution kills millions worldwide every year, according to the WHO, including more than 627,000 in India. One of the biggest culprits in fast-growing India is vehicular traffic: Car ownership in the country of 1.2 billion grew from 20 million in 1991 to 140 million in 2011, and is expected to reach 400 million by 2030.
India’s new Prime Minister Narendra Modi has taken steps to cut down the popularity of cars running on diesel, one of the dirtiest burning fuels, by pegging its cost to world market prices and scrapping a discount that had encouraged diesel consumption.
But experts say that, unless India raises fuel standards to international norms, pollution levels that are already often deemed unhealthy or hazardous will escalate. Unchecked, today’s vehicle trends in India could lead to a three-fold increase in levels of PM 2.5 by 2030 — the tiny particulate matter believed to cause the most damage to human health — according to a study this month by The Energy and Resources Institute in New Delhi, University of California, San Diego and the California Air Resources Board.
Still, few Indian cities have air quality monitors. New Delhi officially has 11, though experts say the readings can be erratic and the reporting opaque. The city reports several key pollutants and this month launched an air quality index, boiling down the ambient readings to a single daily number indicating whether the air is healthy, poor, harmful or hazardous.
Apte, who in January starts as an assistant professor of environmental engineering at the University of Texas, Austin, said that such indices, while perhaps easier for citizens to digest, represent vague urban background readings and can’t help residents understand exactly what risks they face.
What ordinary people really want to know are answers to questions like, “’Should I be taking a walk outside in this neighborhood right now?’ … ‘Is it safe for my child to be playing cricket on the field here?’” he said.
Apte’s goal was to highlight the huge differences between the urban background readings and ground-level pollution along roads. His approach to gathering his data involved twice-daily rush-hour drives from the city center to a southeast suburb.
Policy makers disagree about which sources of pollution are the most worrying, with car traffic, industries and power plants, trash burning and small businesses like brick kilns all vying for attention.
To Apte, that simply means there are lots of ways to start clearing the air.
“The good news about air pollution in Delhi is that there’s a lot of really low-hanging fruit in terms of sectors that we can choose to target,” he said.
He added that the U.S. and Europe began cleaning their skies only after incomes rose and people began to demand change: “I expect fully that we’ll see the same thing in India.” Katy Daigle, Environment Writer, New Delhi , AP