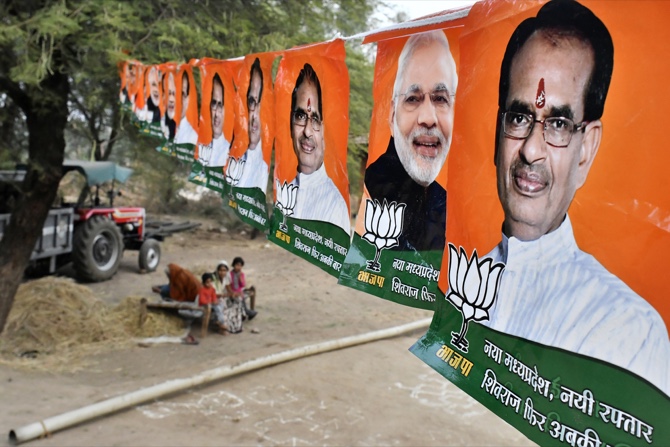 Key Indian states are voting in polls that may be a preview of next year’s national election, with Prime Minister Narendra Modi trumpeting populist welfare schemes to retain power while the opposition works to build alliances that can oust the ruling party.

The central state of Madhya Pradesh may be most emblematic of the national vote out of the five states holding elections. The incumbent administration led by Modi’s Bharatiya Janata Party must overcome a lack of job creation and farmers’ discontent to retain power, while the opposition is struggling to forge a coalition and raise enough funds to campaign.

In a Madhya Pradesh village festooned with flags and posters for Modi’s BJP, Lakhan Singh, a 50-year-old farm laborer, personifies the goodwill generated by the ruling party. At his house, Singh shows off a toilet and a cooking gas cylinder funded by the federal government and championed by Modi. The BJP administration in the state capital Bhopal also enrolled his family in a social security benefit scheme and wrote off 4,000 rupees (USD56) that Singh owed the local power distribution company. “When the government has given me so much, my vote has to go to the BJP,” said Singh, who also voted for Modi in the 2014 election that brought him to power.

Four out of five opinion poll conducted in October suggest the BJP is likely to retain power in Madhya Pradesh, although with fewer seats than before. That’s similar to expectations for the national vote next year, in which Modi is predicted to win with a reduced majority.

But surveys are mixed in other poll-bound provinces, including Rajasthan, where Congress is expected to wrest power from a BJP administration. Results in all the states are due Dec. 11.

Although state elections aren’t always an indicator of national preferences, an opposition victory in Madhya Pradesh would give a big boost in striking alliances with regional parties that may make them more of a threat to Modi.

“If the Congress manages to unseat the BJP in Rajasthan and reduce the BJP’s majority in Madhya Pradesh, as some polls are predicting, this will be heralded by the opposition as a sign of their increasing fortunes,” said professor Katharine Adeney, director of the University of Nottingham Asia Research Institute. “However, this does not necessarily augur well for the opponents of the BJP in the 2019 general elections. The opposing parties to the BJP have been unable to form an alliance against the BJP.” Bloomberg