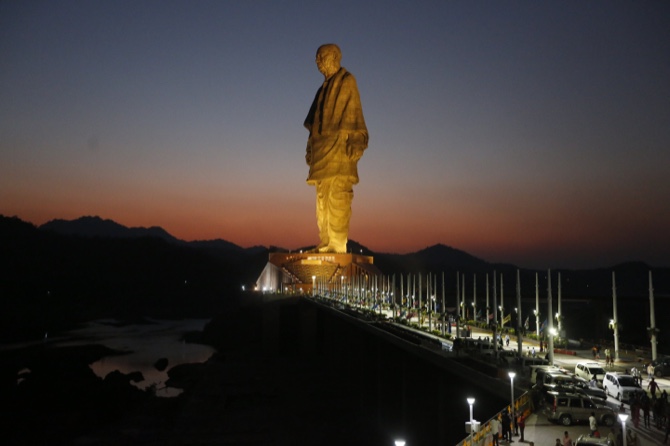 India’s prime minister has unveiled a towering bronze statue of Sardar Vallabhbhai Patel, a key independence leader being promoted as a national icon in the ruling party’s campaign ahead of next year’s general elections.

He was known as the “Iron Man of India” for integrating various states in the post-independence era, when the creation of Pakistan led to massive bloodshed between Hindus and Muslims moving between the two nations.

The statue is part of a broader project by Modi to counter the opposition Indian National Congress Party’s firm claim on India’s history by way of the country’s first prime minister, Jawaharlal Nehru, his mentor, peace activist Mahatma Gandhi, and his daughter, former Prime Minister Indira Gandhi, who was assassinated by her guards in 1984.

Nehru’s great-grandson, Rahul Gandhi, leads the Congress Party, and if a unified opposition wins a majority of seats in parliamentary elections due next spring, he could be a candidate for India’s next prime minister.

The Patel statue “puts the opposition in a quandary because any criticism of Modi’s showmanship will enable him to depict critics as being legatees of those who denied Patel his rightful place in the nation and history,” said Nilanjan Mukhopadhyay, a Delhi-based political analyst and author of the book “Modi: The Man, The Times.”

“In the process, not only will the Statue of Unity literally dwarf statues of all other Indians leaders, but the event will also enable the memory of Sardar to rise imposingly over Congress Party leaders,” Mukhopadhyay said.

At 182 meters, Patel’s bronze figure in Kevadiya, a village in Gujarat, is one of the tallest statues in the world — almost 10 stories higher than the 153-meter Spring Temple Buddha statue in China and nearly twice the height of the Statue of Liberty, which stands at 93 meters.

The 42-month project built by 250 engineers and 3,000 workers began in 2013, when Modi was the top elected official in Gujarat. After he became prime minister in 2014, he pledged to complete it despite some critics balking at the nearly $403 million price tag, which they said could be better spent on welfare programs for India’s poor. MDT/AP