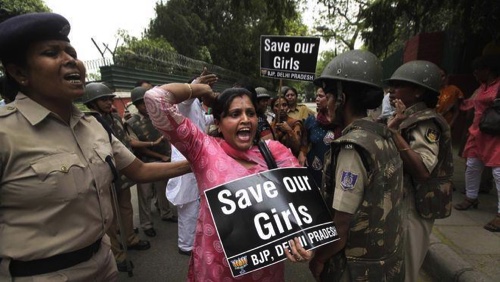 A video showing two sisters in northern India hitting back at men who allegedly harassed them on a crowded bus has drawn huge attention in a country where hundreds of thousands of women silently endure sexual harassment daily.
The video, filmed by a passenger and aired on several television channels yesterday, shows the two young women hitting, punching and beating their harassers with a belt, as other passengers silently look on. The women, identified only by their first names, Arati and Pooja, told reporters that they lashed out at the men after enduring lewd comments and pawing from them.
“No one came to our help. In fact, they tried to stop us and scare us by saying the men would come for us and attack us or throw acid on us,” one of the sisters told New Delhi Television channel.
Press Trust of India reported Monday that the video was shot Friday as the sisters were on their way to college. The video drew a massive response on social media.
By late Sunday, police in the state of Haryana had arrested three men and were investigating the incident.
Sexual violence and harassment faced by Indian women has been the subject of a heated debate in India since the fatal gang rape of a young woman on a moving bus in New Delhi in December 2012.
Hundreds of thousands of ordinary Indians took to the streets in protest after that gruesome attack. The anger pushed the government to overhaul laws to make for more stringent measures to fight attacks against women. AP