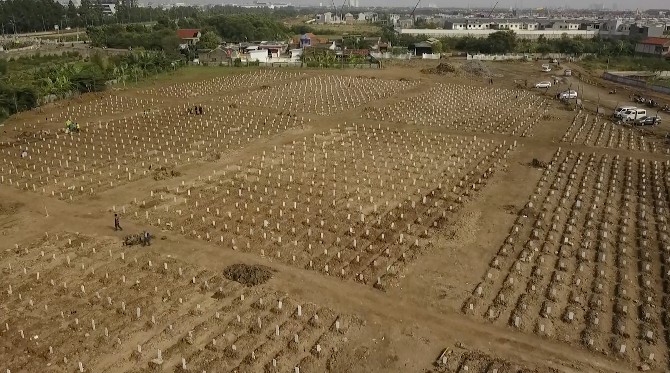 Indonesia surpassed 100,000 confirmed COVID-19 deaths yesterday, a grim milestone in a country struggling with its worst pandemic wave fueled by the delta variant, amid concerns the actual figure could be much higher.
It took 14 months for Indonesia to exceed the 50,000 death mark at the end of May, and just over nine weeks to double it. The Health Ministry recorded 1,747 new deaths of COVID-19 in the last 24 hours, bringing the total to 100,636.
Those figures are believed to be an undercount.
Since the beginning of June, more than 2,800 people have died during self-isolation at home, according to LaporCOVID-19, an independent virus data group that keeps track of deaths at home. Some of those deaths are reflected in official figures but others are not, he said.
“They were rejected by the hospitals, so they went back home and did the self-isolation at home with limited access to medicine, no oxygen and no monitoring from doctors until they died,” said Ahmad Arif, one of the LaporCOVID-19 founders.
WHO says hospitals are in need of isolation rooms, oxygen supplies, medical and personal protective equipment, as well as mobile field hospitals and body bags.
Lia Partakusuma, secretary general of the Indonesia Hospital Association, said intensive care beds continue to be in very short supply, especially outside of Java, where she said her association has received many reports of people dying at home.
“It is very rare that patients come and get into the ICU directly,” she said. “Many of them refuse to wait in the emergency unit, maybe they feel uncomfortable, so they decide to go back home.”
In Bogor, south of Jakarta, Pramirtha Sudirman’s infected brother and parents decided to isolate at home because local hospitals were too crowded in early July.
They consulted with a doctor ahead of time and had a plan to rush to the hospital if the symptoms got worse, the 32-year-old said.
“We knew the risk of doing self isolation,” she said.
After seeming to be on the road to recovery, her father suddenly took a turn for the worse and died at home before they could get him to the emergency room. Her mother and brother have since recovered.
“We tried our best. We do not have any regret as we also know that the hospital was full too,” she said.
Indonesia, the world’s fourth most populous country, has recorded more than 3.5 million COVID-19 cases since March 2020. July was its deadliest month since the pandemic began, with more than 30,100 deaths — more than triple the 7,914 reported in June. Its current per capita death rate is one of the worst in the region, second only to Myanmar. MDT/AP