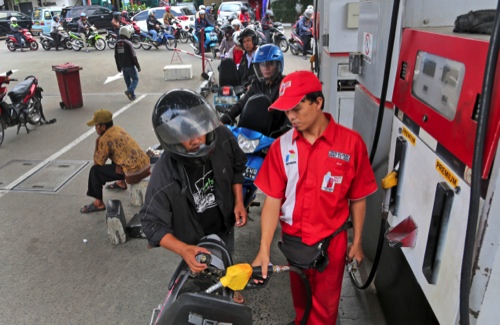 An attendant fills up the tank of a motorbike at a gas station in Jakarta, Indonesia

The first item on the to-do list of Indonesia’s president-
elect is one that successive leaders have struggled with, and could be his toughest: how to wean the country off fuel subsidies that make gasoline almost as cheap as bottled water.
Each year the subsidies cost Indonesia billions of dollars that economists agree would be better spent on creating jobs and building badly needed roads, schools and hospitals in Southeast Asia’s largest economy.
The problem for President-
elect Joko Widodo, publicly known as Jokowi, is that Indonesians are accustomed to some of the cheapest fuel in the world. The subsidies also indirectly keep the cost of public transport and basic foodstuffs affordable, an important consideration in a country where about half of the 240 million people survive on USD2 a day.
Widodo had been hoping for help from outgoing President Susilo Bambang Yudhoyono, who could have cut the subsidies before leaving office on October 20, deflecting some of the public anger and political heat away from the new leader. But Yudhoyono, who raised prices last year by 44 percent after delaying for five years, declined Widodo’s request, saying he had “taken pity” on the people.
Widodo, who won the election convincingly after a campaign that stressed his working class roots and record of progressive leadership as Jakarta governor, has pledged to reduce the subsidy bill, even as members of his own political party urge him not to. They fear more expensive fuel will cut short any honeymoon period.
“I am ready to be unpopular,” Widodo said last week. “We will reduce the fuel subsidies and divert the money to fund more productive projects, seeds for farmers, pesticides, and diesel fuel for fishermen and others sector that need subsidies more. We have to begin to change.”
Indonesia was once an oil exporter and OPEC member, but now imports crude oil and refined fuel to meet demand. It pays overseas fuel suppliers around 11,500 rupiah ($0.98) per liter, but sells it to Indonesians at 6,500 ($0.55) per liter. That’s close to the cost of a liter of bottled drinking water, which range in price from 3,500 to 10,000 rupiah depending on brand and outlet.
The fuel subsidy bill last year totaled $16.5 billion, which was 20 percent of the government budget. That will rise further this year if the world oil price increases.
Faisal Basri, a former economic adviser to Yudhoyono, described the subsidized fuel policy as a “cancer that risks spreading to the whole economy.” He said that two 20 percent hikes, one in September and one early next year, would be enough to help end the dependence.
“If we do that, then we can move full speed ahead in 2016 and escape from this myth” of the need for subsidized fuel, he wrote in a recent blog post. AP