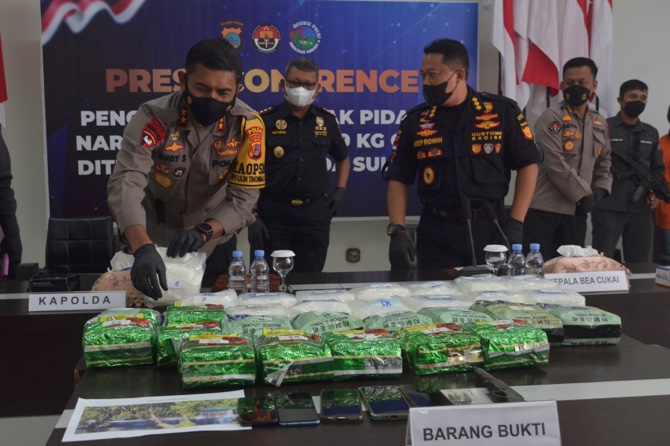 Five people suspected of smuggling 29 kilograms of methamphetamine into Indonesia from Malaysia have been arrested, Indonesian police said yesterday.

The five are part of an international drug smuggling network and include a Malaysian citizen, Central Sulawesi Police Chief Rudy Sufahriadi said at a news conference.

An initial suspect, who was arrested Saturday, told police where the methamphetamine was hidden, and said it originated in China and was smuggled from Malaysia’s Sabah state to Central Sulawesi on a fishing boat, Sufahriadi said.

Further investigation after his arrest led to the arrests of four other people suspected of involvement in the smuggling, Sufahriadi said.

Police also seized a fishing boat, five cellphones and a gun from the suspects.

They face a possible death penalty if found guilty of drug smuggling under Indonesia’s Narcotics Law, among the world’s strictest.

Over the past two decades, easily manufactured methamphetamine has replaced opium and heroin as the dominant illegal drug in the region..

Methamphetamine is smuggled across much of Southeast Asia, China and Australia, part of a multibillion-dollar illegal trade in the drug.

The United Nations Office on Drugs and Crime said late last year that the value of the methamphetamine market in Asia is more than $60 billion. MDT/AP