Indonesia | Some students return to schools, at a distance 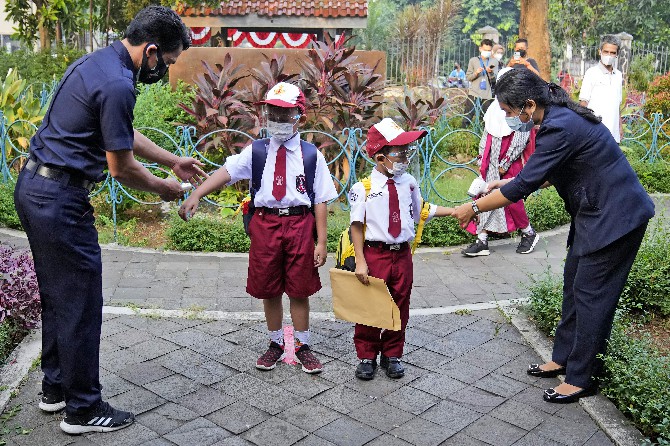 School bells rang in parts of Indonesia’s capital for the first time in more than a year yesterday as schools shut by the coronavirus were allowed to begin reopening as cases decline.
A total of 610 schools that passed standards set by the Jakarta Education Agency reopened their doors, though with many precautions still in place.
In-person schooling will be blended with remote learning and gradually increased based on the government’s evaluation of the situation. Elementary students will initially attend school three days a week, junior high students four days and high school students five days, all with shortened class periods.
The city administration initially planned to reopen schools in June, but postponed the restart when a wave of infections triggered by the highly contagious delta variant engulfed the country.
“We have passed the peak of the second wave of COVID-19 infections,” Jakarta Vice Governor Ahmad Riza Patria said, adding that officials hope to reopen all schools by January.
There are 5,341 schools ranging from elementary to high school in Jakarta, according to government data.
“I feel nervous,” said Akila Malawa, a 12-year-old student going to class for the first time in more than a year at Suluh junior high school. “But I’m so happy to see my friends again.”
“I hope the coronavirus in Indonesia will end so I can go to school and meet friends every day,” said her classmate, Amalwin Harjodisastra.
Schools in several other cities also reopened yesterday.
As schools restart, government guidelines have changed many class traditions. Chatting in class is not allowed, facemasks must be worn at all times and no one can leave class for recess. Schools must slash class capacity by 50% by holding classes in two shifts. Teachers must be vaccinated.
The Health Ministry reported 5,436 new infections yesterday, the lowest daily total since June 9. They have declined since new cases peaked on July 15, when more than 56,000 were recorded.
Indonesia, the world’s fourth most populous country, has recorded more than 4 million cases since the pandemic began. It took 15 months for it to hit 2 million confirmed cases on June 21, and just over nine weeks to hit double that amount last week.
Jakarta, once the country’s COVID-19 center, has recorded declines in active and new cases since mid-July, from more than 100,000 active cases to below 8,000 a day and from more than 10,000 new cases per day to below 500.
Patients are no longer being turned away from hospitals as bed occupancy rates have declined in several regions. The Central Jakarta Health Service says the occupancy rate in several Jakarta hospitals is now below 30%.
Restrictions on public activities, which the government credits with helping reduce pressure on hospitals, are being eased in the capital. Authorities have reopened malls, places of worship and outdoor sporting venues since mid-August with capacity limits, and people must show they’ve been vaccinated.
Last month, Indonesia began vaccinating those aged between 12 and 18.
Indonesia began immunizations earlier than many other countries in Southeast Asia. It aims to inoculate more than 208 million of its 270 million people by March 2022. So far, authorities have fully vaccinated only 35.3 million people and partially vaccinated 26.9 million others. NINIEK KARMINI, JAKARTA, MDT/AP