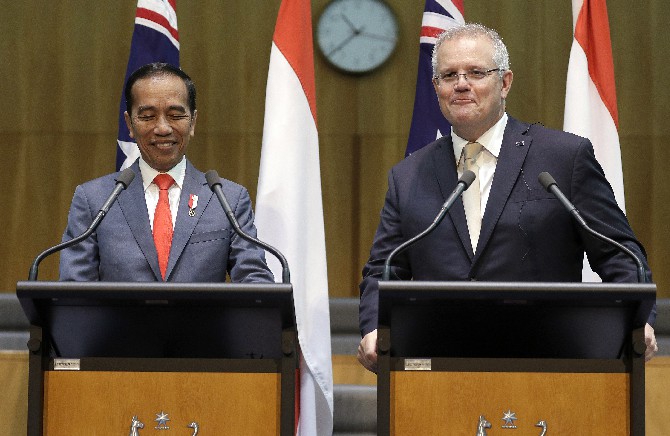 Indonesia’s president spoke to Australia’s Parliament yesterday, urging a closer partnership between their nations as their shared democratic values are threatened by uncertain global economics.
President Joko Widodo was addressing a rare joint-sitting of the Australian Parliament during the first visit to the country by Indonesian leader since Susilo Bambang Yuhhoyono in 2010.
Indonesian and Australian officials had earlier signed documents supporting bilateral free trade that deepens wide-ranging links between the near-neighbors, as the Australian government attempts to reduce its heavy economic reliance on China.
Widodo said his country of 270 million people was forecast to become the world’ s fourth-largest economy by 2050 with the world’s third-largest middle class.
The world could also face more uncertainties by then with greater challenges to geopolitics and geoeconomics, Widodo said.
“Stagnation of economic growth and even the recession of the economy are looming large and it is feared that the values of democracy and diversity are becoming more marginalized,” Widodo said through an interpreter.
“In the midst of the enormous challenges, Indonesia and Australia must focus on strengthening the partnership,” he added.
Indonesia is Australia’s closest neighbor after Papua New Guinea. But the two countries rank as only each other’s 13th most important partner in terms of bilateral trade.
Prime Minister Scott Morrison, who underscored the importance of the bilateral relationship by making Jakarta the destination of his first overseas trip as national leader in 2018, described Indonesia as “one of the star economies of the world over the next 10 to 20 years.”
Morrison said the multifaceted free trade deal which will take effect early this year would be mutually beneficial for both countries.
Monash University, Australia’s largest, will open its first overseas campus in Indonesia under the agreement.
Widodo said he hoped Australia would become an important partner in infrastructure investment as well as education.
The Australian and Indonesian leaders emphasized the closeness of their relationship by sharing an informal dinner at the prime minister’s residence on Saturday with their foreign ministers but no other officials.
Morrison said Governor-General David Hurley had taken the two leaders on a “roo tour” on Saturday — a golf buggy trip around the grounds of Government House to see the many kangaroos.
Morrison thanked Indonesia for sending army engineers and emergency crews to help rebuild after recent wildfires. They are now responding to widespread flooding in southeast Australia.
Widodo only used English during his speech to Parliament to say: “A friend in need is a friend indeed” and: “Good day, mate.” AP