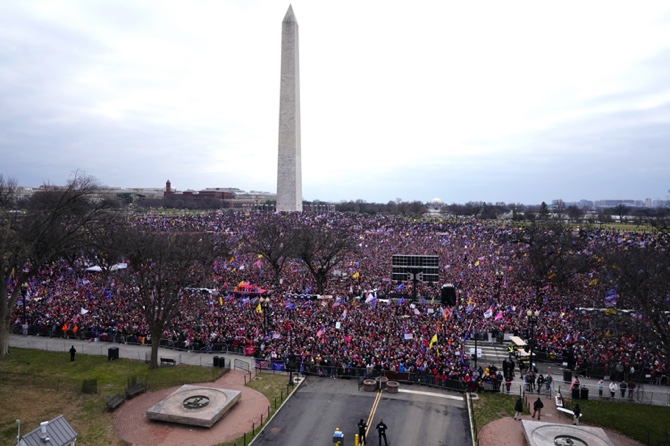 Intelligence reports compiled by the U.S. Capitol Police in the days before last year’s insurrection envisioned only an improbable or remote risk of violence, even as other assessments warned that crowds of potentially thousands of pro-Trump demonstrators could converge in Washington and create a dangerous situation.

The documents, obtained by The Associated Press, underscore the uneven and muddled intelligence that circulated to Capitol Police officers ahead of the Jan. 6 riot, when thousands of Donald Trump loyalists swarmed the Capitol complex and clashed violently with law enforcement officers in their effort to disrupt the certification of the results of the 2020 presidential election. The intelligence reports in particular show how the police agency, up to the day of the riot itself, grievously underestimated the prospect of chaotic violence and disruptions.

The contradictory intelligence produced by law enforcement leading up to the riot has been at the forefront of congressional scrutiny about the Jan. 6 preparations and response, with officials struggling to explain how they failed to anticipate and plan for the deadly riot at the Capitol that day. The shortcomings led to upheaval at the top ranks of the department, including the ouster of the chief,  though the assistant chief in charge of protective and intelligence operations at the time remains in her position.

There was, according to a harshly critical Senate report issued in June, “a lack of consensus about the gravity of the threat posed on January 6, 2021.”

“Months following the attack on the U.S. Capitol, there is still no consensus among USCP officials about the intelligence reports’ threat analysis ahead of January 6, 2021,” the report stated.

The documents, known as a “daily intelligence report” and marked “For Official Use Only,” have been described over the last year in congressional testimony and in the Senate report. The AP on Friday evening obtained full versions of the documents for Jan. 4, 5 and 6 of last year. The New York Times highlighted the Jan. 4 report in a story last year on intelligence shortcomings.

On each of the three days, the documents showed, the Capitol Police ranked as “highly improbable” the probability of acts of civil disobedience and arrests arising from the “Stop the Steal” protest planned for the Capitol. The documents ranked that event and gatherings planned for Jan 6. by about 20 other organizers on a scale of “remote” to “nearly certain” in terms of the likelihood of major disruptions. All were rated as either “remote,” “highly improbable” or “improbable,” the documents show.

“No further information has been found to the exact actions planned by this group,” the Jan. 6 report says about about the “Stop the Steal” rally.

The Million MAGA March planned by Trump supporters is rated in the document as “improbable,” with officials saying it was “possible” that organizers could demonstrate at the Capitol complex, and that though there had been talk of counter-demonstrators, there are “no clear plans by those groups at this time.”

Another event by a group known as Prime Time Patriots was similarly described as having a “highly improbable” chance for disruption, with the report again stating that “no further information has been found to the exact actions planned by this group.” Eric Tucker & Michael Balsamo, Washington, MDT/AP