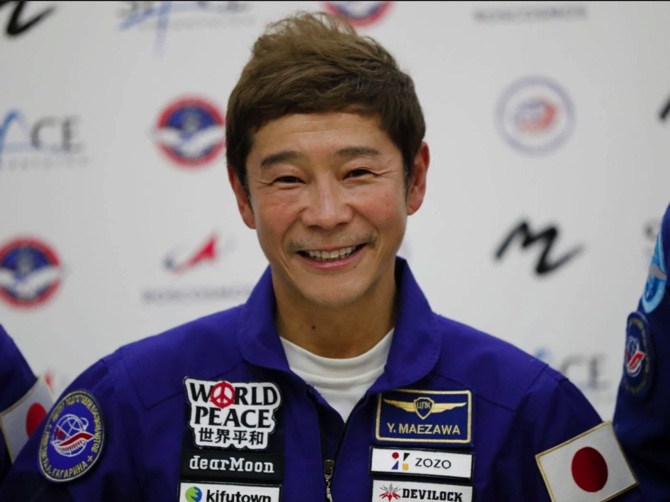 A Japanese space tourist rejected criticism from those who questioned his decision to pay a fortune for a trip to the International Space Station, saying the “amazing” experience was worth it.

Speaking to The Associated Press in a live interview from the orbiting space outpost, billionaire fashion tycoon Yusaku Maezawa said even though he had imagined what his mission would be like before the flight, he was struck by the reality of space travel.

Maezawa, 46, and his 36-year-old producer Yozo Hirano are the first self-paying tourists to visit the space station since 2009. Asked about reports claiming that he paid over $80 million for a 12-day mission, Maezawa said he couldn’t disclose the contract sum but admitted that he paid “pretty much” that amount.

Maezawa deflected the criticism from those who questioned his decision to spend money on his space travel instead of using it to help people back on Earth, saying that “those who criticize are perhaps those who have never been to space.”

“The most memorable moments were when I saw the International Space Station from Soyuz just before the docking and when we entered after the docking,” he said.

He admitted that space tourism is mostly for the super-rich now, but added that those who embark on space travel must be prepared for other challenges.

“Yes, it is still rather expensive, but it is not only about money,” he told the AP. “It takes time for your body to adjust in this environment and the training for emergencies takes at least a few months. So, honestly speaking, it is only accessible for those who have time and are physically fit and those who can afford it. But we don’t know if that is still going to be the case in 10 years, 20 years’ time.”

He acknowledged that taking a nap still presents a challenge.

“I am not sleeping well, to be honest. A sleeping bag has been provided but it is too hot so I am not using it,” he said.

He was happy with the length of his trip.

“Twelve days was about right for me,” Maezawa added. “I am getting over the motion sickness so I can enjoy the remaining days. I am returning on the 20th and starting to miss Japan. Once I return, I want to have sushi!”

Maezawa and Hirano, who was filming his mission, blasted off for the International Space Station yesterday in a Russian Soyuz spacecraft along with Russian cosmonaut Alexander Misurkin.

Space Adventures, a Virginia-based company that organized his flight, had previously sent seven other tourists to the space station in 2001-2009.

“They are like super-heroes who save Earth,” he said. “Not only that they are ahead of the latest science, but trained physically and mentally, and very brave. I can feel directly how human can develop this far, and our lives depend on these people – how it changes in the future. I respect them a lot.”

He and Hirano will be returning to Earth with Misurkin on Sunday.

Before the flight, Maezawa had compiled a list of 100 things to do in space during his mission after asking the public for ideas.

The tycoon has also booked a flyby around the moon aboard Elon Musk’s Starship, which is tentatively scheduled in the next few years. He’ll be joined on that trip by eight contest winners.

“I am planning to go to the moon in 2023 – we are in the final stages of selecting the 8 people for the Dear Moon project,” he said. HARRIET MORRIS & VLADIMIR ISACHENKOV, MOSCOW,MDT/AP