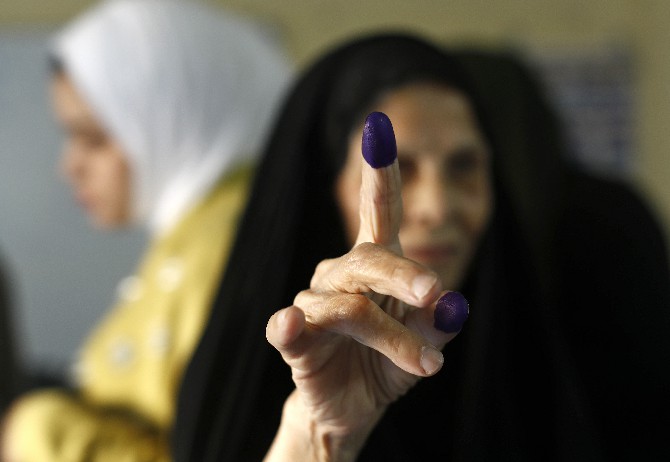 Iraq closed its airspace and scrambled its air force yesterday as voters headed to the polls to elect a parliament that, despite widespread skepticism, some Iraqis hope will deliver reforms after decades of conflict and mismanagement.
The vote was originally scheduled for next year but was brought forward in response to a popular uprising in the capital Baghdad and southern provinces in late 2019. Tens of thousands of people took to the streets to protest endemic corruption, poor services and rising unemployment. They were met with deadly force by security forces firing live ammunition and tear gas. More than 600 people were killed and thousands injured within just a few months.
Although authorities gave in and called the early elections, the death toll and the heavy-handed crackdown prompted many young activists and demonstrators who took part in the protests to later call for a boycott of the polls.
A series of kidnappings and targeted assassinations that killed more than 35 people has further discouraged many from taking part. Apathy is widespread amid deep skepticism that the independent candidates stand a chance against established parties and politicians, many of them backed by armed militias.
“I voted because there needs to be change. I don’t want these same faces and same parties to return,” said Amir Fadel, a 22-year-old car dealer, after casting his ballot in Baghdad’s Karradah district.
A total of 3,449 candidates are vying for 329 seats in the parliamentary elections, which will be the sixth held since the fall of Saddam Hussein after the U.S.-led invasion of Iraq in 2003 and the sectarian-based power-sharing political system it produced.
More than 250,000 security personnel across the country were tasked with protecting the vote. Soldiers, police and anti-terrorism forces fanned out and deployed outside polling stations, some of which were ringed by barbed wire. Voters were patted down and searched.
Iraq’s President Barham Salih and Prime Minister Mustafa al-Kadhimi urged Iraqis to vote in large numbers.
“Get out and vote, and change your reality for the sake of Iraq and your future,” said al-Kadhimi, repeating the phrase ‘get out’ three times after casting his ballot at a school in Baghdad’s heavily fortified Green Zone, home to foreign embassies and government offices.
The 2018 elections saw just 44% of eligible voters cast their ballots, a record low, and the results were widely contested. There are concerns of a similar or even lower turnout this time.
By midday, turnout was still relatively low and streets mostly deserted. In a tea shop in Karradah, one of the few open, candidate Reem Abdulhadi walked in to ask whether people had cast their vote.
“I will give my vote to Umm Kalthoum, the singer, she is the only one who deserves it,” the tea vendor replied, referring to the late Egyptian singer beloved by many in the Arab world. He said he will not take part in the election and didn’t believe in the political process. Qassim Abdul-Zahra, Baghdad, MDT/AP