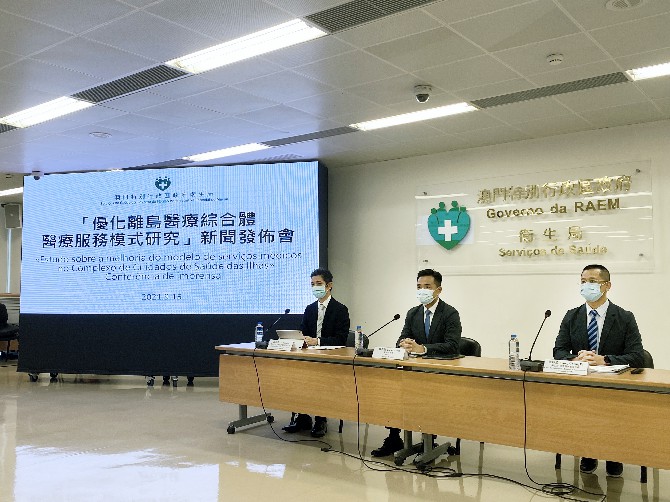 The government wants to operate the future Islands Hospital as a public facility under private management, director of the Health Bureau (SSM) Dr. Alvis Lo admitted yesterday during a press conference.
“We want to choose the [operation] model number 3 [public-private partnership] because it’s the one we think is more suitable to Macau’s health market and our reality,” the director replied to a question from the media on the topic.
This third operation model, which is the cooperation between the public and private sector, keeps the ownership of all the facilities under public ownership but hands over the operations and management to one or several private entities to manage as a private hospital, as explained by SSM’s Head of the Office of Studies and Planning, Wong Cheng Po.
The decision is also supported by a study, ordered by the SSM to the Faculty of Medicine from the Hong Kong University (HKUMed), which resulted in holding the press conference to present the results.
The HKUMed study presented and compared four hospital operation model options, ranging from the fully public model (1), which is the system in place at the Conde de São Januário Hospital Center, up to the privately owned concession model (4), going through the other two options that congregate the public and private interests.
Addressing the conclusions of the study, Wong noted that the third option, which was heading towards private interests, was the one recommended by the HKUMed. It is also the model of operation of the University of Hong Kong-Shenzhen Hospital, located in Futian District in Shenzhen.
The same official also noted that among the advantages of this operating model is its flexibility, “not needing to follow the rules and regulations for the acquisition of goods and services from the government.”
Questioned on the topic by the Times, Lo responded that different models have different degrees of flexibility as well as advantages and disadvantages, noting that this system in place allows a flexible management system and decision-making by the hospital management without following the existing rules for the acquisition of goods and services by the government. “There will be a legal regime that will regulate on such matters,” he said.
Also questioned by the media whether the decision of moving a publicly funded project into this private managing model would not be a waste of public money as well as contribute to increasing the costs with healthcare in Macau, Lo responded that what is on the line is the “raising of the quality of [health] service provided to the public,” noting that in this way, “the principle of making good use of public purse is well fulfilled.”

Management from
abroad is certain
During the press conference, Wong remarked that “due to its small scale, there are not many institutions in Macau that can have enough capacity and resources to take over the management and operations of the Islands Hospital.” He hinted that, as it has been said previously, the hospital complex management would potentially be a partnership with Beijing’s Peking Union Medical College Hospital, also known as Beijing Xiehe Hospital.
Questioned by the media on this topic, Lo admitted that negotiations and talks have been ongoing for some time regarding potential partners but has yet to disclose if any agreement has been made with the Beijing medical institutions or if other possibilities are being evaluated and negotiated at the moment.
“Obviously, if there will be a third party involved, we need to negotiate with these other parties from different locations. But this is not the right time to disclose this.”
Although the decision seems to have been made in accordance to the HKUMed study, with all indicators pointing for the operation model chosen by the government, the SSM director said that the purpose of the press conference was to present the results from the study, “so the public can present opinions.”
Lo added that on Monday (September 20), there will be a meeting from the SSM’s Medical Council in which the government will present the conclusion of the study to obtain opinions from the medical sector.