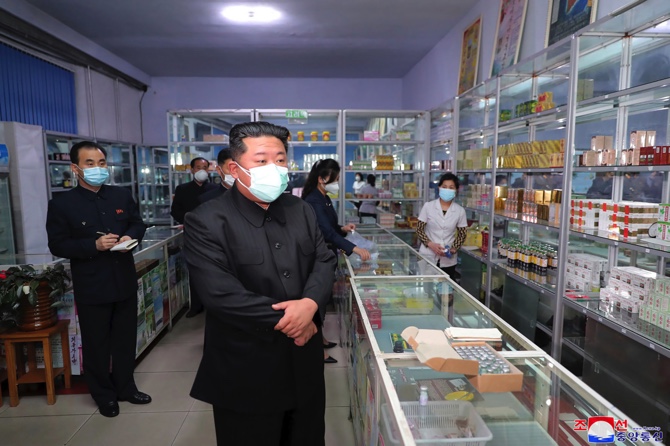 It’s only been a month since North Korea acknowledged having a Covid-19 outbreak, after steadfastly denying any cases for more than two years. But already it may be preparing to declare victory.

According to state media, North Korea has avoided the mass deaths many expected in a nation with one of the world’s worst health care systems, little or no access to vaccines, and what outsiders see as a long record of ignoring the suffering of its people.

North Korea’s official virus numbers, experts believe, have as much to do with propaganda to boost leader Kim Jong Un as with a true picture of what’s happening in the country, and there’s widespread doubt about their accuracy.

What’s clear, though, is that the daily updates from state media make it appear inevitable that the nation will completely defeat a virus that has killed more than 6 million people around the world. According to the official tally, cases are plummeting, and, while 18% of the nation of 26 million people reportedly have had symptoms that outsiders strongly suspect were from Covid-19, less than 100 have died.

The South Korean government as well as some experts believe that North Korea may soon declare that it has beaten the virus. This will be linked, of course, to Kim’s strong and clever guidance.

A victory lap, however, isn’t a foregone conclusion. Doing so, according to some experts, would deprive Kim of a useful tool to control the public and could open the government up to humiliation if cases continue.

“There are two sides to such a declaration,” said Moon Seong Mook, an analyst with the Seoul-based Korea Research Institute for National Strategy. “If North Korea says that Covid-19 has gone, it can emphasize that Kim Jong Un is a great leader who has overcome the pandemic. But in doing so, it can’t maintain the powerful restrictions that it uses to control its people in the name of containing Covid -19.”

Outsiders suspect that Kim is using the outbreak to boost internal unity at a time when many of his people are tired of 2 ½ years of draconian curbs that have hurt their livelihoods.

However North Korea deals with its description of the pandemic, many signs, at least in public statements, point to a declaration of success in dealing with a virus that has confounded the richest countries in the world.

In the initial stage of the outbreak, Kim described a “great upheaval” as daily fever cases — North Korea rarely calls them Covid -19, presumably because it lacks test kits — reached about 400,000. Now, however, the leader is suggesting that the outbreak has peaked, with his health officials maintaining a widely disputed fatality rate of 0.002%, the lowest in the world.

The question many outside experts are wrestling with is: What is the true state of misery in North Korea, which has banned nearly all outside journalists, aid workers and diplomats since early 2020?

North Korea is widely believed to be manipulating its true death toll to prevent any harm to Kim. It might also have exaggerated the number of earlier fever cases to boost vigilance against the virus and draw stronger public support for authorities’ anti-virus controls. North Korea has recently reported about 17,000 to 30,000 new fever cases each day, for a total of 4.7 million. It says — to widespread outside disbelief — that only 73 have died.

Whatever the real situation is, outside monitoring groups say they haven’t detected signs of anything catastrophic in North Korea.  MDT/AP