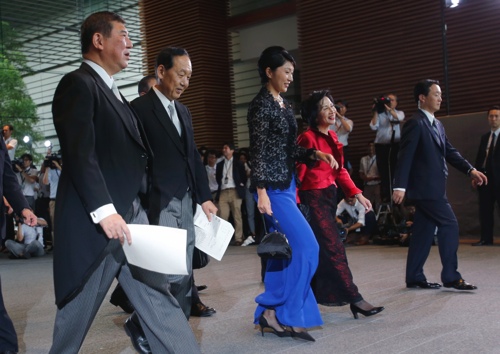 Japan’s prime minister picked five women for his Cabinet yesterday, matching the past record and sending the strongest message yet about his determination to revive the economy by getting women on board as workers and leaders.
Japan has a vast pool of talented, well-educated women, but they are far under-represented in positions of power in government and corporations. Women make up 10 percent of parliament and just 3.9 percent of board members of listed Japanese companies, versus 12 percent at U.S. corporations and 18 percent in France.
Women here have long complained about the obstacles to getting taken seriously at work, getting equal pay for equal work and finding child-care or helpful spouses.
Prime Minister Shinzo Abe reiterated yesterday that a key part of his “Abenomics” growth strategy is making greater use of women and promoting them to leadership posts — a campaign dubbed “womenomics,” a term he has embraced. Abe has set a goal of having women in 30 percent of leadership positions in both the private and public sectors by 2020.
“Realizing a society where women can shine is a challenge our Cabinet has undertaken,” he said during a news conference. “I look forward to the wind of change these women will bring.”
Having five women in the Cabinet, which currently has 18 members, is extremely rare for Japan. It matches the highest number, set back in 2001, under Prime Minister Junichiro Koizumi. Abe’s previous Cabinet, dissolved earlier in the day, had two women ministers.
Although holding ministerial positions are in some ways ceremonial in Japan, where government affairs are largely run by professional bureaucrats, expanding the presence of women in a place as high-profile as the Cabinet is a step toward sexual equality in Japan.
“As a woman, I am happy to have even one additional woman in power. There doesn’t have to be a reason. I am rooting for them,” said Kazuko Watanabe, a public relations specialist in the port city of Yokohama. “I hope they do their best to get the job done.”
Yuko Obuchi, daughter of a former prime minister, was named trade and economy minister, probably the most prominent post, and Midori Matsushima was appointed justice minister.
Abe risked offending the long line of powerful men in his ruling party, who had been waiting to get their promotions.
While some experts say upsetting male colleagues could weaken Abe’s grip on power, others said he may strengthen his position by inspiring women, who are very active in party politics in Japan at the voter level even if generally don’t hold senior positions.
Several top ministers were retained, such as Fumio Kishida as foreign minister and Taro Aso as finance minister, both men.
In the U.S., President Barack Obama has three women in Cabinet positions, and has appointed women to other powerful positions such as the head of the Federal Reserve Board and Supreme Court justice. In France, women make up about half the ministers.
The Geneva-based World Economic Forum ranked Japan 105th in last year’s Global Gender Gap Report, which measures economic equality and political participation. Iceland was No. 1, followed by the Scandinavian nations. Germany was 14th and the U.S. 23rd.
Traditional as well as pop culture here tends to encourage the stereotype of the docile, cutesy girl as the ideal for womanhood. And Japanese politicians have been prone to sexist gaffes.
Earlier this year, a Tokyo city assemblyman apologized for heckling a woman assembly member who was making a speech about infertility and marriage. The other assembly members had joined in the taunting and laughter, and the apology came only after an outburst of sympathy on social networks and TV news shows.
Other women appointed by Abe include Sanae Takaichi as minister of internal affairs and communications and Eriko Yamatani as minister in charge of Japanese abducted by North Korea, an area she has been active in the past.
Haruko Arimura was tapped to be minister in charge of promoting women, a new post, in addition to minister of food safety and regulation reform. All five women are legislators.
Satomi Moroda, who heads Women and Work Research Center in Tokyo, a nonprofit group, said society’s consciousness must evolve from the mindset that the primary roles of women are that of wife and mother, while the man’s role is to work outside the home, but such ideas are still entrenched.
“The appointments of women mark progress,” she said. “We must first start with numbers, or things won’t move forward.” AP