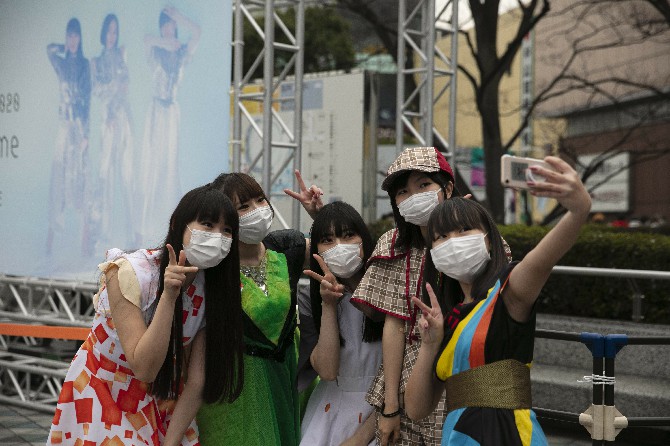 Japanese Prime Minister Shinzo Abe said yesterday that the success of new measures such as letting employees work from home and expanding hospital treatment capacity will determine whether the country can control its virus outbreak.
“We are at an extremely important time in ending the spread of infection at an early stage,” Abe said at a meeting of a task force on the outbreak.
He said sporadic cases involving unknown transmission routes and small clusters of cases are occurring, and that slowing the pace of new infections is crucial for stopping the spread of the disease. Japan has confirmed 850 cases, the third highest number behind China and South Korea.
Basic measures announced yesterday to fight the illness include urging people to wash their hands carefully, follow “cough etiquette” and avoid going out when feeling unwell. They also urge people with mild illness to go to family doctors instead of hospitals with specialized virus-control facilities, which are treating many seriously ill patients.
In a country known for long working hours blamed for “karoshi,” or death from overwork, the virus scare may help change Japan’s corporate culture and allow people to work more flexible hours and ask for time off when they are not feeling well.
“In order to prevent the further spread of the coronavirus, commuting in shifts and teleworking need to be widely exercised across society,” said Economy, Trade and Industry Minister Hiroshi Kajiyama. “We will call on the corporate world to actively implement (the measures).”
Flexible working hours are mainly aimed at reducing the risk of getting infected on packed trains, but companies are also encouraged to “create an environment where employees can ask for sick leave when they are feeling unwell,” Kajiyama said. He said the trade ministry began flexible hours and is promoting teleworking.
Japan’s case total includes 691 people infected on the Diamond Princess cruise ship, docked in Yokohama near Tokyo. Abe’s government has been widely criticized after the quarantine of the ship was seen to have failed to stop the virus from spreading. Four former passengers on the ship died and more than a dozen people who were evacuated by their home countries later tested positive for the virus. Six government officials involved in the quarantine effort also contracted the virus.
Japanese health officials and government experts have acknowledged the quarantine was not perfect, but have defended it. They said Japanese health authorities faced tough challenges in the absence of established rules in such a crisis and that it wasn’t feasible to quarantine the ship’s passengers and crew elsewhere.
While the ship quarantine was capturing global attention, the virus was spreading across Japan as many tourists visited the country during the Lunar New Year holiday, experts said. AP