Japan ahead of China in the pool at Asian Games 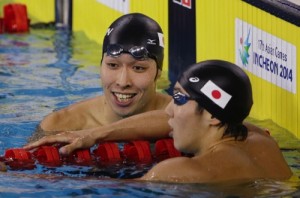 Kosuke Hagino set an Asian record in the 200-meter medley yesterday as Japan gained a 7-5 edge over rival China in the ultra-competitive battle for gold in the Asian Games pool.
Hagino set the new mark at 1 minute, 55.34 seconds to win his second individual gold medal in as many nights at Incheon, South Korea, with teammate Hiromasa Fujimori picking up silver.
Despite falling behind in swimming, China surged past South Korea to top the medal standings with 26 golds overall, together with 14 silvers and 18 bronze. South Korea had 14 gold medals in all, one more than Japan.
Entered in six individual events, Hagino is already taking some of the spotlight in a swimming competition that had been expected to be dominated by the great rivalry between China’s Olympic champion Sun Yang and South Korean star Park Tae-hwan.
He stole their thunder on the opening night of swimming competition by winning the 200-meter freestyle from Sun and Park, extending a run of excellent form beginning at last month’s Pan Pacific Championships in Australia where he beat Michael Phelps in the 200 IM and also won the 400 IM.
While Hagino said his timing had been off on the first turn of the medley, he said the error had only been slight.
“I believe I am quite fit in this competition and I really want to keep this momentum to the very end,” said Hagino, who also collected a bronze in the backstroke. “I’ll keep myself focused and try to do my best and try to deliver all I have now.”
Japan added four golds yesterday to the three it collected in the pool on Sunday.
Junya Koga won the men’s 50 backstroke in 24.28 seconds, just 0.04 seconds off his Asian record, edging Japanese teammate Ryosuke Irie and China’s rising star Xu Jiayu. And Kanako Watanabe won the women’s 200 breaststroke in 2:21.82, followed by teammate Rie Kaneto and China’s Shi Jinglin.
With Hagino swimming the second leg, the Japanese men then wrapped up proceedings with an emphatic win in the 4×200 freestyle relay, winning in 7:06.74, almost 10 seconds ahead of China and nearly 15 seconds ahead of South Korea.
China’s chances in the relay weren’t helped by Sun’s withdrawal after injuring his hand in the 200 free. It wasn’t clear whether the injury would affect the rest of Sun’s campaign at Incheon.
Chinese women picked up gold medals in the 100 freestyle and the 50 butterfly. World championships silver medalist Lu Ying started off the evening by leading China to a medal sweep in the fly, and Shen Duo won the 100 free in 54.37 from teammate Tang Yi and Japan’s Miki Uchida.
While there are four more days left in the swimming competition, Watanabe put Japan’s success so far down to a positive dynamic among team members.
“Looking back at this season, at the Pan Pacific Championship, we Japanese team won a good number of gold medals. Yes, swimming is an individual sport, but we are a very good team and we associated very well within our team,” Watanabe said. “Maybe, that’s one of the reasons why we performed so well this year.”
In other sports, China’s women set a world record in the 10-meter air rifle competition with a score of 1,253.8, after having their initial disqualification overturned on appeal.
China won the synchronized swimming team event, adding to its silver a day earlier in the duet, with Japan finished second and North Korea earning the bronze. And China downed South Korea to win the women’s team title in badminton. Christopher Bodeen, Incheon, AP