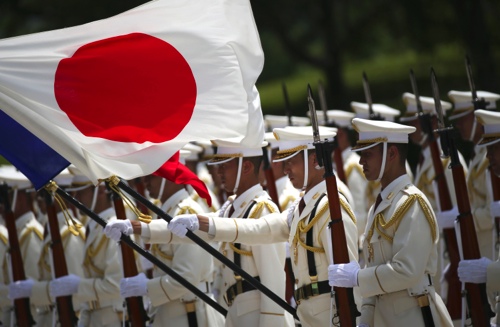 China’s growing airspace and maritime activities have escalated tension in area waters, Japan’s Defense Ministry said in an annual report yesterday, stressing the need for its military to play a greater role both inside and outside the country.
But there is growing concern that Japan’s defense budget may be insufficient to achieve the goals set by Prime Minister Shinzo Abe to bolster the country’s military.
The annual report, released after Cabinet approval, says Japan is particularly concerned about China’s establishment of an air defense identification zone that includes disputed East China Sea islands that both countries claim. Japan scrambled jets in response to Chinese military flights 400 times last year, up from about 300 a year earlier.
The zone is China’s attempt to “unilaterally change the status quo, escalate the situation and may cause unintended consequences in the East China Sea,” the report said. “Japan is strongly concerned.”
The 429-page white paper also said that North Korea has improved long-range ballistic missile capability and miniaturization of nuclear warheads, and could develop a sense of confidence over its strategic deterrence against the U.S., leading to an “escalation of military provocations by North Korea in the region.”
Japan’s defense budget grew 2.2 percent to 4.8 trillion yen (USD48 billion) for fiscal 2014 from the previous year — a second year of increase in a row since Abe took office, after more than a decade of decline to as low as 4.6 trillion yen in 2012, down 6 percent from 2002.
Abe’s Cabinet in July approved a reinterpretation of Japan’s war-renouncing constitution to allow the military to defend foreign countries and play a larger international role. Earlier, Japan adopted a new defense strategy in December, which calls for a 5 percent increase in defense spending over the next five years.
Some Japanese media and experts have speculated that more money will be needed to achieve the more assertive military role, but Abe has ruled out any changes to the five-year plan.
The 2014-2019 defense program includes acquisition of surveillance drones, anti-missile destroyers and other equipment as Japan’s defense priority shifts from its northern reaches to the East China Sea, where Tokyo and Beijing are embroiled in a territorial spat over the uninhabited islands. The purchases would cost 24.7 trillion yen ($247 billion), up 5 percent from the previous plan. AP