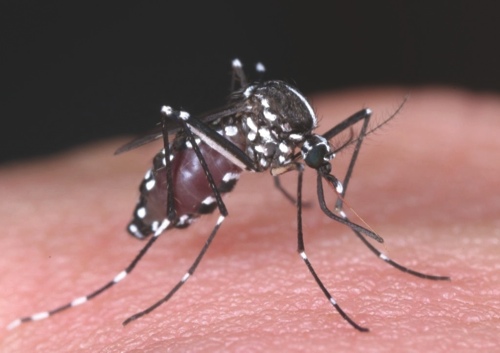 This undated photo released by the National Institute of Infectious Diseases via Kyodo News, shows a tiger mosquito

Japan reported more patients with dengue fever after last week finding the country’s first domestic cases of the mosquito-borne disease since the 1940s.
Nineteen people in Japan have been confirmed to have dengue fever in addition to the three cases confirmed last month, public broadcaster NHK reported yesterday, citing the nation’s health ministry.
Domestic mosquitoes probably picked up the virus from people who arrived from elsewhere and passed it on to the patients, Japan’s health ministry has said.
Dengue is transmitted by the bite of an infected mosquito and can’t be spread directly from person to person. The outbreak will likely be temporary because mosquitoes carrying the virus can’t make it through the coming winter, said Masanori Kameoka, a virologist at Kobe University.
“Dengue virus is passed on between humans and mosquitoes and that cycle needs to continue to cause an epidemic,” said Kameoka. “The cycle will be cut when the weather cools down and mosquitoes die. It isn’t reported to be passed on to the next generation of mosquitoes through eggs.”
A woman without a history of traveling abroad contracted dengue fever, the health ministry said on Aug. 27. The country confirmed two more cases last week. All three had a history of visiting Yoyogi park in central Tokyo and been bitten by mosquitoes.
The park, one of the largest and most popular in central Tokyo, was fumigated on Aug. 28. A sample of mosquitoes collected at the park didn’t carry the virus, according to the ministry.
The Tokyo government, which on Aug. 28 set up a hotline for dengue fever queries, received 172 calls as of Sunday asking about health risks and prevention measures, Haruo Kotaka, an official of its public health department, said by telephone yesterday. Calls came from across Japan from people who visited Tokyo, he said. Bloomberg