Japan | Nissan said to have paid tuition for Ghosn children 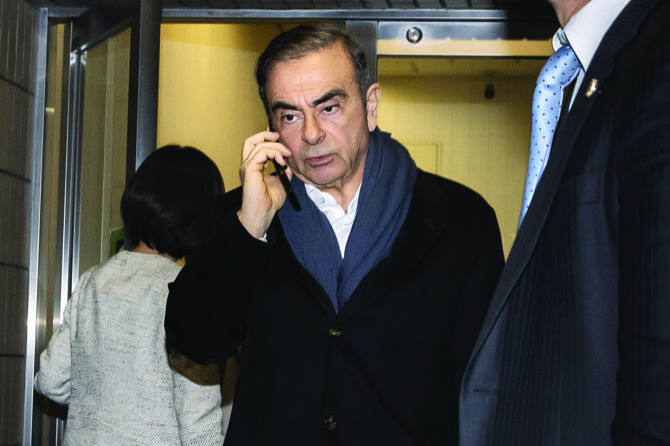 Nissan Motor Co. paid tuition for all four of ousted chairman Carlos Ghosn’s children when they attended Stanford University between 2004 and 2015, according to people familiar with the matter.

The perk was part of Ghosn’s employment contract from 1999, when he was hired as chief executive officer of the Japanese carmaker, said one of the people, who asked not to be named because the information isn’t public. The benefit, which isn’t common among top executives, would have been worth at least USD601,000, according to fee schedules published by Stanford during the years his children were enrolled.

In a statement, Nissan declined to comment on the details of executive compensation packages. Ghosn’s lawyer in Paris, Jean-Yves Le Borgne, declined to comment, while a spokesman for Stanford in California didn’t respond to requests for comment.

Ghosn, 65, has been charged in Japan with under-reporting his income by tens of millions of dollars at Nissan and misusing company funds. He has denied wrongdoing and is awaiting trial on bail after spending 108 days in a Tokyo prison. The Stanford tuition adds to a list of lavish extras Ghosn enjoyed as the head of Nissan and its alliance partners Renault SA and Mitsubishi Motors Corp., including luxury residences on four continents and a wedding party at the Chateau of Versailles.

While no such payments are alleged in Ghosn’s case, it’s “highly unusual” that Nissan would pay his kids’ university fees, according to Robin Ferracone, chief executive of Farient Advisors, an executive-compensation consulting firm based in New York City and Los Angeles.

“Typically you only see tuition reimbursements as part of expatriate assignments, and those are for kids below university age,” Ferracone said.

Nissan’s official filings in Japan and the U.S., where its shares trade as American depositary receipts, didn’t include any information about Ghosn’s benefits. Under U.S. law, executives’ benefits are treated as taxable compensation, and U.S. public companies must report them to investors. The U.S. Securities and Exchange Commission has opened an investigation into whether Yokohama-based Nissan accurately disclosed executive compensation. Nissan has said it is cooperating.

In Japan, companies are required to disclose compensation for highly paid executives in their financial reports but aren’t required to spell out the benefits they receive.

Nissan has said that Ghosn, besides collecting salaries totaling $16.9 million in 2017 from Nissan, Renault, and Mitsubishi, received $8.9 million in compensation from a Dutch joint venture, Nissan-Mitsubishi BV, without approval from either company. Two other Dutch-based ventures financed by the alliance are under scrutiny for buying and renovating luxury homes for Ghosn in Beirut and Rio de Janeiro, and for subsidizing an extended weekend at Rio’s Carnival celebration last year for Ghosn, his wife, and eight other couples.

Separately, Renault found that Ghosn received a “personal benefit” of  $57,000 for his Marie-Antoinette-themed wedding party at Versailles in 2016 after Renault made a charitable donation to the chateau. Ghosn has said he’ll reimburse the expense.

The Renault-Nissan alliance also made philanthropic donations to a private high school near Paris attended by at least two of Ghosn’s children and to a debutante ball where two of his daughters were presented to society. Ania Nussbaum & Carol Matlack, AP