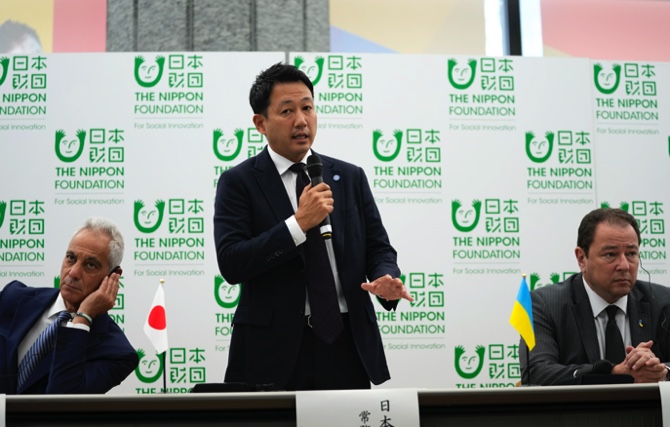 A Japanese foundation announced yesterday it is launching a fundraising drive to provide more than 1,200 Ukrainian evacuees in Japan with additional financial support for language studies and other needs.

Jumpei Sasakawa, executive director of the Nippon Foundation, said it aims to raise 1 billion yen ($7.4 million) through cooperation with the U.S. and Ukrainian ambassadors.

The foundation has already pledged 5 billion yen ($37 million) for the transportation and living costs of Ukrainian evacuees. Japan has so far accepted more than 1,200 war-displaced Ukrainians since Russia invaded in late February.

Sasakawa said he was approached by U.S. Ambassador to Japan Rahm Emanuel, who asked him to enable ordinary Japanese to help support Ukrainian evacuees.

Ukrainian Ambassador to Japan Sergiy Korsunsk, who joined Sasakawa and Emanuel at a news conference, urged Japanese to see donations to the fund as an “investment by Japan in a nation that will be always be friends with you.” He said Ukrainians in Japan will be “a bridge between our countries” when Ukraine is ready to rebuild itself.

Japan quickly joined the United States and other major industrialized economies in imposing sanctions on Russia and supporting Ukraine because it fears a similar development in East Asia, where Beijing has become increasingly assertive and has threatened to take military actions against Taiwan if it refuses to unite with China.

Human rights groups have criticized Japan for neglecting displaced people from other countries such as Afghanistan and Myanmar, who have not received such a warm welcome or a nationally-organized support system.

“I would say, this is a win-win situation. Japan could use the help on its labor shortage and Ukraine people or evacuees can bring their skill set and find work and contribute to their temporary new home,” Emanuel said.

The Nippon Foundation was founded by Sasakawa’s grandfather, Ryoichi Sasakawa, a far-right politician and businessman, to distribute money earned from motorboat racing, a popular gambling pastime.

Asked why he turned to the foundation, Emanuel, who has roots in Ukraine, said it is known for humanitarian assistance and was already working to support Ukrainian evacuees. MARI YAMAGUCHI, TOKYO, MDT/AP