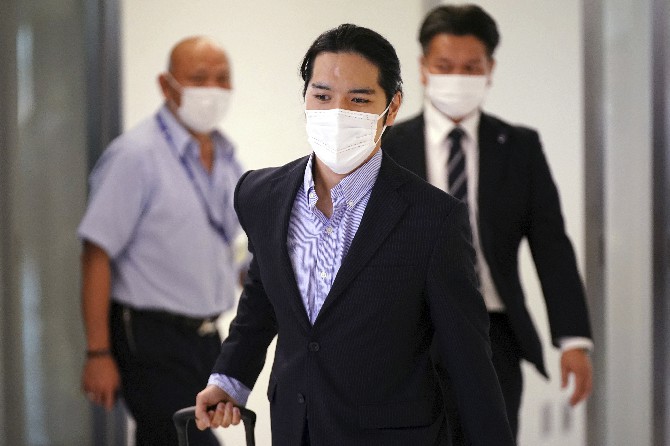 Japanese Princess Mako’s fiancé returned to Japan yesterday for their marriage, which was suspended for more than three years because of a financial dispute involving his mother.
Kei Komuro, 29, arrived from New York, where he studied law and plans to work as a lawyer, with his hair in a ponytail, a bold statement by Japanese standards for someone marrying a princess in the tradition-bound imperial family.
Mako, also 29, is a niece of Emperor Naruhito. She and Komuro, who were classmates at Tokyo’s International Christian University, announced in September 2017 their intent to marry the following year, but the financial dispute surfaced two months later and resulted in their wedding being suspended.
The financial dispute involved whether 4 million yen ($36,000) his mother received from her former fiancé and spent on Komuro’s education in Japan was a loan or a gift.
Komuro left for New York in 2018 to study law, and this is the first time he has returned since then. He made no comments at the airport, bowed silently and left in a car.
He and Mako are to hold a news conference after his two-week coronavirus quarantine, according to Kyodo News and other Japanese media.
The couple is expected to register their marriage in October and start a new life together in New York.
His mother’s financial dispute was an embarrassment for the imperial family and divided public opinion. Mako’s father, Crown Prince Akishino, asked Komuro to provide a clear explanation and expressed mixed feelings about the marriage plans.
Many Japanese said the marriage should be scrapped, while others said the couple should pursue their romance.
Mako, apparently aware that her wedding is not fully celebrated by the people, reportedly offered to decline all official wedding rituals and a payment of up to 150 million yen ($1.35 million) she is entitled to receive when leaving the imperial family.
The payment, funded by taxpayers, is meant to maintain the image of former royal members. Mako would be the first female imperial family member since World War II to not receive the payment when marrying a commoner.
The Imperial House Law allows only male-line succession. Female members of the royal family must renounce their royal status when they marry a commoner — a practice that has resulted in a decline in the size of the royal family and a shortage of successors to the throne. MDT/AP