Japan | Prosecutors vow to hold Ghosn as long as needed 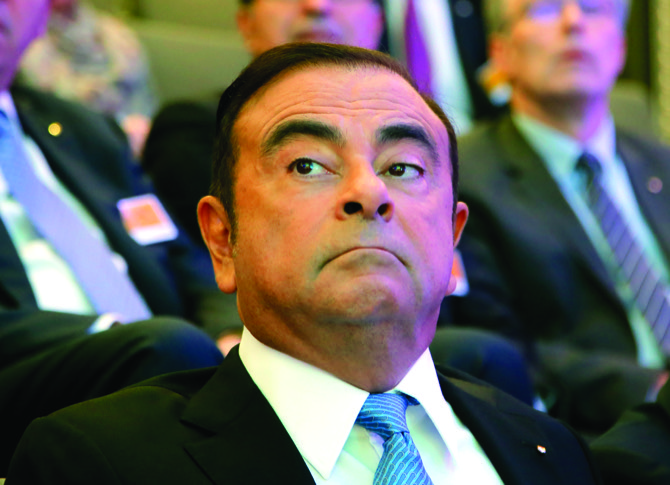 Japanese prosecutors said yesterday they will detain former Nissan chairman Carlos Ghosn for as long as is needed to finish their investigation into suspicions of financial irregularities, as the Renault-Nissan-Mitsubishi alliance reaffirmed its partnership.

Shin Kukimoto, deputy chief prosecutor for the Tokyo District Public Prosecutors’ Office, defended its handling of Ghosn, who was arrested on Nov. 19 along with another Nissan executive, Greg Kelly.

“We are not detaining [Ghosn] for an unnecessarily long time,” Kukimoto told reporters. “We only take necessary steps as needed.”

Kukimoto refused to confirm reports that both Ghosn and Kelly have denied the allegations against them. Ghosn is suspected of violating financial laws by underreporting millions of dollars in income and Kelly of collaborating in that. Nissan has also said an internal probe triggered by a whistleblower found Ghosn allegedly misused company assets.

Japanese automakers Nissan Motor Co. and Mitsubishi Motors Corp. have since dismissed Ghosn as their chairman. Renault SA of France has named an interim chairman but kept him on while seeking more information about his case.

Last week, prosecutors obtained a court’s approval to keep Ghosn until today, in line with standard investigative procedures in Japan, Kukimoto said. After an initial investigation period, Japanese authorities can detain a suspect up to 20 days per charge, and gain more time by adding more charges.

“Japan is a law-abiding country and this is the way our justice system works. I don’t see any problem with that,” Kukimoto said. “Each country has its own history and culture […] It is not appropriate to criticize a system in another country just because it’s different from your own.”

Prosecutors are expected to obtain a court’s permission today to keep Ghosn and Kelly in custody for another 10 days, until Dec. 10. Kukimoto declined to comment on that.

The arrest and detention of such a prominent businessman is shedding light on Japan’s pre-indictment detention of suspects, even those suspected of financial crimes, which has long drawn criticism from human rights activists.

Lebanon, where Ghosn is from, said in a statement yesterday that Foreign Minister Gebran Bassil summoned Japanese Ambassador Matahiro Yamaguchi in Beirut and asked for a fair and transparent investigation that meets international standards and allows Ghosn to communicate with his family and lawyers. Kukimoto said Ghosn can meet with his lawyers and embassy envoys, but is not allowed to have his lawyer present during questioning.

At the time of his arrest, Ghosn was heading the Renault-Nissan-Mitsubishi alliance, which says it sold more than 10.6 million vehicles in nearly 200 countries in 2017.

Ghosn’s legal predicament has raised speculation about troubles within the alliance.