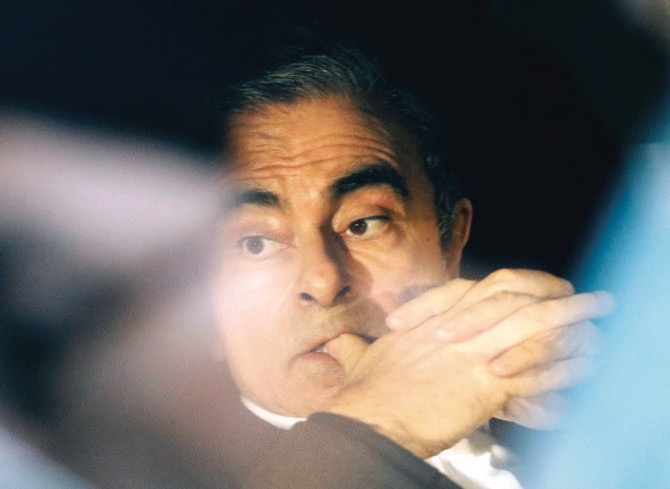 Former Nissan chairman Carlos Ghosn’s release from detention nearly four months after his arrest has gripped Japan, giving the public a rare glimpse into how the criminal justice system works.

Ghosn was recuperating yesterday, his lawyer said, after leaving the Tokyo Detention Center the evening before, just in time for his 65th birthday on Saturday. His trial on charges of financial misconduct is sure to draw attention as one of the biggest court cases in the history of corporate Japan.

The front pages of all major newspapers carried photos yesterday of Ghosn after he left the detention center, his identity obscured by a surgical mask, blue cap and laborer’s clothes.

Broadcasters showed stacks of Japanese currency about the size of a small bed to demonstrate what his bail of USD8.9 million would have looked like. The payment was made electronically but the full amount was required, unlike bail systems like in the U.S. where a portion is offered as surety and the full amount is forfeited only if the defendant fails to appear.

While Westerners wondered why the concept of “presumed innocent” doesn’t seem to apply in Japan, many here were shocked his release came so soon.

“An exceptional case of quick release,” said a headline in the newspaper Yomiuri.

Suspects in Japan are usually not released from detention until all documents from both sides are readied for a trial because prosecutors worry that they might tamper with evidence or flee. The court rejected two earlier requests by Ghosn for bail.

Theoretically, suspects in Japan are presumed innocent until proven guilty. But the complexity of a case can determine the length of pretrial detention. And long detentions mean suspects practically serve time before they are found guilty.

Seiho Cho, a defense lawyer, says his clients wonder why they aren’t getting released as quickly as Ghosn was. Ghosn’s legal team offered special conditions, such as a surveillance camera, to win his release.

Bail should be granted without such stringent restrictions, Cho said.

“What we have now is totally wrong,” he said. “We hope this will have a positive effect on future cases.”

Ghosn, who headed the Renault-Nissan-Mitsubishi Motors alliance, has been charged with falsifying financial reports, under-
reporting his income and breach of trust in having Nissan shoulder investment losses and make payments to a Saudi businessman. He says he is innocent, that the income allegedly under-reported was never paid or decided, that Nissan never suffered the investment losses and the payments were legitimate business expenses.

There have been several cases in which suspects signed false confessions after harsh questioning during months-long detentions, but were later exonerated by DNA tests or other evidence.

“I realize there is the view that we can’t give special treatment to Mr. Ghosn or that Japan has its own way of doing things,” he said, but “the case of Carlos Ghosn has highlighted how outdated this system is.”

Ghosn has hired a star defense lawyer, Junichiro Hironaka. Nicknamed “the Razor,” he has won rare acquittals in a nation where the conviction rate is 99 percent.

Hironaka said the lawyer most responsible for securing Ghosn’s release was Takashi Takano, who studied at Southern Methodist University’s law school in Dallas.

“We hope this can serve as a way to end the ‘hostage justice system,’” Hironaka told reporters yesterday, using the term often used by critics to refer to long detentions typical in Japan.