Jason Chao hits back at police and data protection office 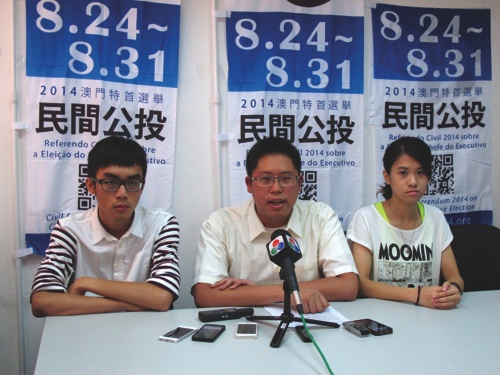 Jason Chao filed three complaints to the Public Prosecutions Office (MP) yesterday against three government agencies, accusing them of abusing their powers, malfeasance and calumnious denunciation (making defamatory accusations).
The civil referendum organizer later told the Times that he will hold another referendum if the central government decides to replicate the Hong Kong electoral reform model in Macau.
In his letter to the MP, Jason Chao has named the Office for Personal Data Protection (GPDP), the Public Security Police (PSP) and the Judiciary Police (PJ) and accused them of suppressing lawful activities “in which the legitimate interests of the Open Macau Society and citizens were harmed.”
He requested that the MP investigate alleged violations of the Penal Code by the aforementioned government agencies.
“GPDP’s action did not only disrupt the commission on the civil referendum’s course to carry out the civil referendum according to plan – it also, to a large extent, impaired residents’ [right] to participate normally in the event,” he claimed.
He then accused PSP of intercepting residents who voted in the referendum at their mobile voting booths, and claimed that the police committed malfeasance by violating residents’ privacy and intimidating them.
PSP officers reportedly jotted down residents’ personal information, including their ID numbers, after they were seen voting at the booths. The authorities claimed that they would be asking those residents to be witnesses in the future.
Jason Chao reiterated that organizing and participating in a civil referendum is in correspondence with the law and that the authorities’ interference is an abuse of power.
He called on the MP to investigate the issue in accordance with the law.
Jason Chao spoke to the Times later in a phone interview and said that he will consider organizing another civil referendum if Beijing imposes a model of universal suffrage for the Chief Executive in Macau that is similar to the one currently causing disputes in Hong Kong.
The model demands that CE election candidates acquire nominations from over half of the members of a 1,200-member nomination committee. There is also a restriction on the number of candidates who can stand in the election.
“My stance is that civil nomination is very important. There should not be unreasonable restrictions placed on people’s right to be elected,” Mr Chao said.
Moreover, he pointed out that the civil referendum organized by the New Macau Association this year was very similar to the one organized in 2012, albeit addressing a different topic. However, the criticism and suppression faced by this year’s referendum was far greater. He believes that political events in nearby regions have played a role in changing the authorities’ measures for handling the issue.
“The previous time [in 2012] – only the pro-establishment organizations attacked [the referendum], but the government did not suppress it or make any noise (…) I think it is the situations in Taiwan, Hong Kong and mainland [that led to the change],” he declared.
Jason Chao believes that the authorities feel that social movements in the region have become increasingly inflamed after incidents like the Sunflower Student Movement in Taiwan and the social movements in Hong Kong. As a result, they are afraid that the situation will get out of control.
“Therefore, they are suppressing any activities that are seen as damaging to their authority,” he said.
Moreover, if “Occupy Central” – which seeks to force the central government to reconsider the Hong Kong electoral reform model – does indeed take place in the neighboring SAR, then Jason Chao has said that he would go there and support the event if necessary.

Jason Chao has revealed that he and his colleagues are planning to write a book that details the preparation for the civil referendum, and the struggles they faced in the process. He is considering writing the book in both Chinese and English. He also suggested that the book might be released in a digital format instead of being published in hard copies. Nevertheless, he said that the project is in a very early stage and that they have yet to decide whether or not to pursue it in the future.