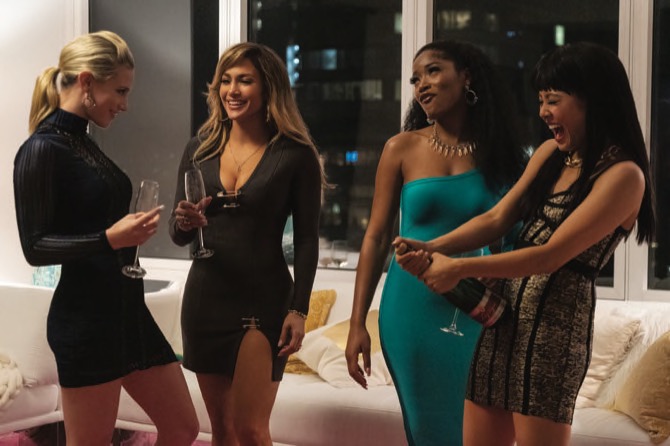 From left: Lili Reinhart, Jennifer Lopez, Keke Palmer, and Constance Wu in a scene from “Hustlers”

Hustlers saves all of its tricks for the end. It’s a banger of an ending, too, which is something that so few films manage to nail. The emotion, the stakes, the character development and the why of it all hit around the same time. This, you think, is the movie. Then suddenly it’s over just when it started to get great.

Until then, “Hustlers” kind of spins its wheels in telling the true story of a group of New York City strippers who, put out by the recession’s effects on their Wall Street patrons, start a side con that involves drugging their wealthy marks and running up exorbitant credit card bills that they get a cut of. Writer and director Lorene Scafaria adapted Jessica Pressler’s nuanced and revealing New York Magazine story about the ordeal.

As pure entertainment, it gets by well enough thanks in large part to Scafaria’s humane and lively filmmaking, a killer soundtrack and Jennifer Lopez, whose character Ramona might technically be the second lead, but is the honey-voiced, stiletto-sharp soul of the movie. It’s the kind of singular performance that you can’t even begin to imagine anyone else even attempting, nor would you want to. She bursts on the frame in an extended and impressive striptease to Fiona Apple’s “Criminal” that has every eye and dollar in the room held captive and her grip on the camera and the audience doesn’t let up until the very end. And to watch a scene like this from the female gaze is something truly special. The women may be half naked, but it’s never gratuitous, just matter of fact.

We’re welcomed into Ramona’s world through Constance Wu’s Dorothy (stage name Destiny), who is the new girl in the club, where Cardi B and Lizzo have some fun playing the other dancers. She wants to learn what Ramona knows, and Ramona becomes her de facto mentor in the ways of appealing to the different types of men they’ll come across on any given night. Soon, Dorothy/Destiny is bragging that she is pulling in as much money as a heart surgeon, and spending like it’ll always be so. With all this cash, she helps her grandmother get out of debt, but also buys an enormous Gucci purse, a Versace swimsuit and an Escalade (typically, and amusingly, with $1 bills).

“Everything was so glamorous and cool,” she says, recounting her story in present day to a journalist played by Julia Stiles. But that was 2007, and pretty soon the recession would hit and their clientele would be decimated.

All we know of Dorothy/Destiny’s ambition at this point is that she doesn’t want to be dependent on anyone. Fair enough, but it’s not a lot to go on (even with the introduction of a daughter), especially when she and Ramona and a few other girls, Mercedes (Keke Palmer) and Annabelle (Lili Reinhart) start drugging their marks to make ends meet and keep themselves bedecked in designer wares.

There’s only so much a movie can do with so many complex issues swirling around — the often gross entitlement and bravado of the men dropping thousands of dollars at a strip club regularly, the effect their words and actions have on the women they paid, the inner lives that led all these people to the club every night and the intoxicating allure of the money being thrown around so cavalierly.

“Hustlers” is curiously being positioned as a Robin Hood-in-platforms story of populist revenge, but it doesn’t really reconcile with their means. They justify it saying that they’re just doing what all the titans of business have been doing to the country for years. But then they go off and spend their money on all the capitalist wealth signifiers that their targets are after too.

The film is at its best when it’s about the bond between the women, but it’s a theme that doesn’t hit home until far too late. Perhaps it’s a problem in the structure of the story. It withholds so much information about Destiny until the very end that it’s a struggle to care or empathize with her for the bulk of the movie.

“Hustlers” would have benefited from a little more of a tease. Lindsey Bahr, AP Film Writer