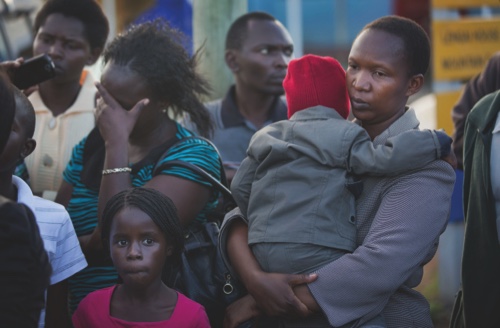 Relatives wait for news of the return of the bodies of those killed in the Mandera attack, with other relatives at Wilson Airport in Nairobi

Al-Shabaab, the al-Qaeda-linked Islamist militia, said it carried out an attack on Christians traveling on a bus in northeastern Kenya, killing 28 people.
Gunmen attacked the Nairobi-bound vehicle yesterday morning local time while it was traveling between the towns of Mandera and Bulla Arabia, about 800 kilometers northeast of the capital, Mandera Deputy County Commissioner Elvin Korir said in a phone interview. Non-Muslims were separated from other passengers before being killed, he said. The bus was carrying a total of 60 people, according to the Interior Ministry.
“The Mujahedeen intercepted a bus, which had on board a group of Christians that enjoyed the killing and the maiming of Muslims,” al-Shabaab spokesman Sheikh Ali Mohamed Rageh said in a statement read on Radio Andulus, a pro-al-Shabaab broadcaster.
Kenya has faced increasing attacks by Islamist militants since sending its troops into neighboring Somalia in October 2011 to fight al-Shabaab, which has waged an insurgency against that country’s government since 2006. The group claimed responsibility for an attack on the Westgate mall in Nairobi in September 2013 in which at least 67 people died, along with other attacks that have taken place along Kenya’s coast this year.
Kenya Defence Forces aircraft yesterday raided camps where the suspected attackers had been based, the Interior Ministry said on its Twitter account, without saying where the camps were located.
“The attackers’ camp, located in Somalia, was destroyed this morning,” Kenya Defence Forces spokesman Colonel David Obonyo said in an e-mailed statement. “Ground troops are in hot pursuit of the fleeing attackers.”
Attacks in Kenya by the militants, along with ethnic and inter-communal clashes in the north and along the coast, have damaged Kenya’s tourist industry. Al-Shabaab in June warned foreign tourists not to visit the country because it is a “war zone.”
The militant group linked yesterday’s attack to a crackdown on at least four mosques by the Kenyan authorities in the port city of Mombasa last week. Many of Kenya’s Muslims, who make up about 11 percent of the country’s 45 million population, live in its coastal region.
“That attack is payback for the actions of their fellow Christian soldiers in Kenya that killed many innocent Muslim at prayers in a mosque in Mombasa over the past week,” Rageh said.
Police arrested at least 350 people and seized weapons including hand grenades and petrol bombs, along with jihadist literature. The raids were carried out after the police received information that the mosques were being used to encourage radicalism, according to the Kenya Police.
Al-Shabaab also reiterated its call for Kenyan forces to withdraw from Somalia.
“We have in the past warned you to stop the bloody massacre of innocent Muslims both in our country Somalia and Kenya and again we warn you think about the lesser of two evils,” Rageh said. Abjata Khalif and Mohamed Sheikh , Bloomberg