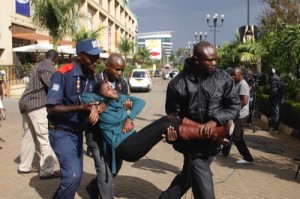 In this Saturday, Sept. 21, 2013 file photo, a security officer helps a wounded woman outside the Westgate Mall

Kenyans yesterday marked one year since al-Shabaab Islamist militants attacked the Westgate Mall in the capital, Nairobi, leaving at least 67 people dead and slashing tourism income from East Africa’s largest economy.
The raid began on a Saturday at lunchtime when gunmen entered the shopping center spraying bullets and lobbing grenades, killing people who were aged eight to 78 and spanning 13 nationalities. Al-Shabaab, which is trying to oust the government of Somalia, said the assault was revenge for Kenyan military intervention in that country, which lies on Kenya’s northern border. It took Kenyan forces four days to secure the mall, after which the bodies of four gunmen were recovered.
“Nairobi is one major bomb away from a major catastrophe, not just in terms of security but also the economy,” Nic Cheeseman, associate professor of African politics at the University of Oxford, said in a phone interview on Sept. 12. “Most people I know are anticipating another significant attack; most believe it’s a ‘when’ not an ‘if’ situation.”
The Westgate assault prompted extra security measures. The government swore in a new intelligence chief this month, increased spending to boost border checks and police training and rounded up undocumented foreigners and people that the Kenyan authorities say have links to Islamist militants. Human rights groups including Amnesty International condemned the crackdown, saying it unfairly targeted people of Somali origin.
Al-Shabaab, which announced a formal alliance with al-Qaeda in 2012, has been waging its insurgency in Somalia since 2007 in a bid to create a state ruled by Shariah, or Islamic law.  Sarah McGregor , Bloomberg