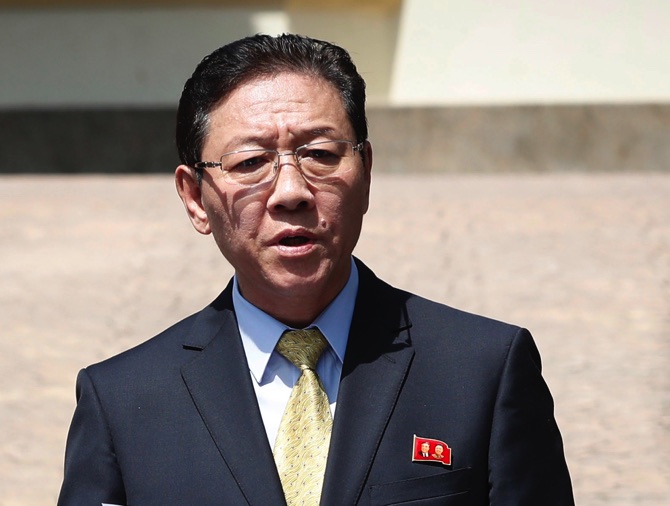 Malaysia said yesterday that its expulsion of North Korea’s ambassador was intended to warn Pyongyang that it cannot manipulate the investigation into the killing of the North Korean leader’s half brother.

The government on Saturday gave Ambassador Kang Chol 48 hours to leave the country after he refused to apologize for his strong accusations over Malaysia’s handling of the investigation into the Feb. 13 killing of Kim Jong Nam at Kuala Lumpur’s airport.

“I think we have given a clear message to the North Korean government that we are serious about solving this problem and we do not want [the investigation] to be manipulated,” Deputy Prime Minister Ahmad Zahid Hamidi was quoted as saying yesterday by Malaysian national news agency Bernama.

The death of Kim, the estranged half brother of North Korean leader Kim Jong Un, has unleashed a diplomatic battle between Malaysia and North Korea. Malaysian authorities said Kim died within 20 minutes after two women smeared his face with VX, a banned nerve agent considered a weapon of mass destruction.

North Korea has rejected Malaysia’s autopsy finding that VX killed Kim. Kang has accused the Malaysian government of trying to hide something and said it colluded with outside powers to defame North Korea.

Kang’s expulsion came just days after Malaysia said it would scrap visa-free entry for North Koreans and expressed concern over the use of the nerve agent.

Ri Tong Il, a former North Korean deputy ambassador to the United Nations, has said Kim probably died of a heart attack because he suffered from heart disease, diabetes and high blood pressure.

Authorities released a North Korean chemist from custody on Saturday due to a lack of evidence to charge him and deported him on the same day. Ri Jong Chol, however, has accused Malaysian police of threatening to kill his family to coerce him into confessing to the crime.

Malaysia is also looking for seven other North Korean suspects, four of whom are believed to have left the country on the day of the killing. Three others, including an official at the North Korean Embassy and an employee of Air Koryo, North Korea’s national carrier, are believed to still be in Malaysia. Kang Chol, AP