Kirk Douglas died at 103: an obituary 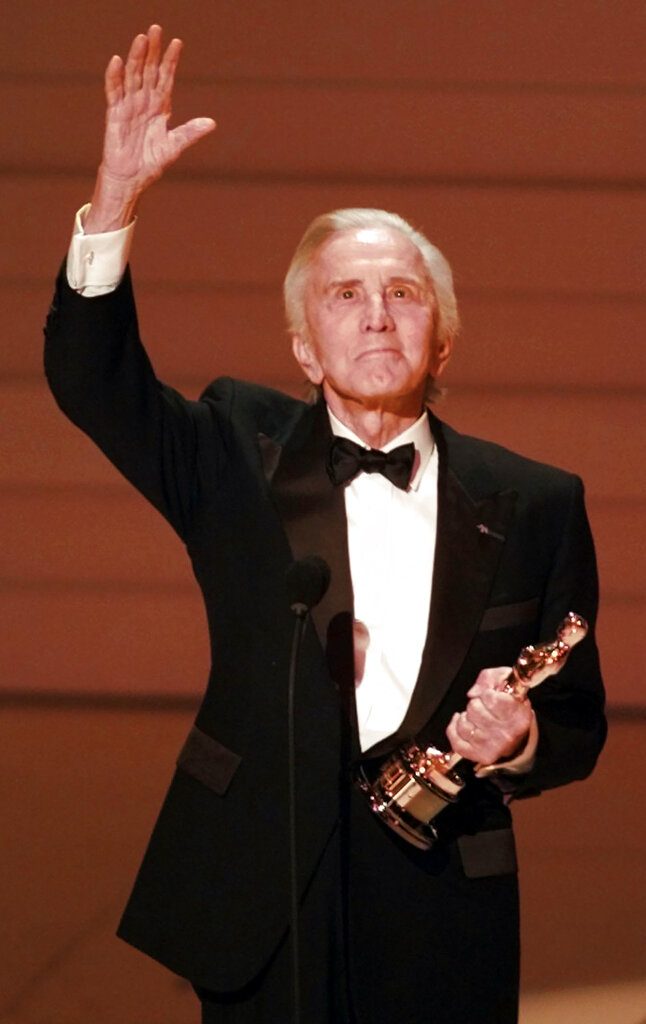 Kirk Douglas, the muscular, tempestuous actor with the dimpled chin, lived out an epic American story of reinvention and perseverance, from the riches he acquired and risked to the parts he took on and the boundaries he defied. Among the most popular, versatile and recognizable leading men of the 20th century, he could will himself into a role or a favorite cause as mightily as he willed himself out of poverty.

Douglas, who died Wednesday at 103, was a force for change and symbol of endurance. He is remembered now as a final link to a so-called “Golden Age,” the father of Oscar winner Michael Douglas and a man nearly as old as the industry itself. But in his prime, he represented a new kind of performer, more independent and adventurous than Clark Gable, Spencer Tracy and other greats of the studio era of the 1930s and 1940s, and more willing to speak his mind.

His career began at the peak of the studios’ power and ended in a more diverse, decentralized age that he helped bring about.

Reaching stardom after World War II, he was as likely to play cads (the movie producer in “Bad and the Beautiful,” the journalist in “Ace in the Hole”) as he was suited for the hero-slave in “Spartacus,” as alert to the business as he was at home before the camera. He was producing his own films at a time most movie stars were content to act and was working with an enviable range of directors, from a young Stanley Kubrick to a middle-aged John Huston, from a genius of noir like Jacques Tourneur to such master satirists as Billy Wilder and Joseph L. Mankiewicz.

Acting served as escape and as confession. His favorite among dozens of films was the contemporary Western “Lonely are the Brave,” which came out in 1962 and included a line of dialogue Douglas called the most personal he ever spoke: “I’m a loner clear down deep to my very guts.”

He never won a competitive Oscar, but he received an honorary one, along with a lifetime achievement award from the American Film Institute, an honorary Golden Globe and a Presidential Medal of Freedom.

His standing came in part from his role in the downfall of Hollywood’s blacklist, which halted and ruined the careers of writers suspected of pro-Communist activity or sympathies.

By the end of the 1950s, the use of banned writers was widely known within the industry, but not to the general public. Douglas, who years earlier had reluctantly signed a loyalty oath to get the starring role in “Lust for Life,” delivered a crucial blow when he openly credited the blacklisted Oscar winner Dalton Trumbo for script work on “Spartacus,” the Roman epic about a slave rebellion that was released in 1960. (A few months before, Otto Preminger had announced Trumbo’s name would appear on the credits for “Exodus,” but “Spartacus” came out first.)

“Everybody advised me not to do it because you won’t be able to work in this town again and all of that. But I was young enough to say to hell with it,” Douglas, criticized at times for taking undue credit for bringing down the blacklist, said about “Spartacus” in a 2011 interview with The Associated Press. “I think if I was much older, I would have been too conservative: ‘Why should I stick my neck out?’ ”

The most famous words in a Douglas movie were said about him, not by him, in “Spartacus.” Roman officials tell a gathering of slaves their lives will be spared if they identify their leader. As Douglas rises, a growing chorus of slaves jump up and shout, “I’m Spartacus!” Douglas stands silently, a tear rolling down his face.

Life was not a role to be underplayed. His outbursts frightened co-workers and family members alike. He was compulsive about preparing for movies and a supreme sufferer on camera, whether stabbed by scissors in Wilder’s “Ace in the Hole” or crucified in “Spartacus.”

Critic David Thomson dubbed Douglas “the manic-depressive among Hollywood stars, one minute bearing down on plot, dialogue and actresses with the gleeful appetite of a man just freed from Siberia, at other times writhing not just in agony but mutilation and a convincingly horrible death.”

While filming “Lust for Life,” he was so caught up in Vincent van Gogh he feared becoming suicidal himself.

Douglas recounted in his memoir that John Wayne yelled at him for playing “a part like that.”

“We got to play strong, tough characters. Not those weak queers,” Wayne said.

Issur Danielovitch was born in 1916 to an impoverished Jewish family in Amsterdam, New York. His name evolved over time. He called himself Isidore Demsky until he graduated from St. Lawrence University. He took the name Kirk Douglas as he worked his way through the American Academy of Dramatic Arts, choosing “Douglas” because he wanted his last name still to begin with “D” and “Kirk” because he liked the hard, jagged sound of the “K.”

Douglas was a performer as early as kindergarten, when he recited a poem about the red robin of spring. He was a star in high school, and in college he wrestled and built the physique that was showcased in many of his movies. He was determined, hitchhiking to St. Lawrence and convincing the dean to approve a student loan. And he was tough. One of his strongest childhood memories was of flinging a spoonful of hot tea into the face of his intimidating father.

“I have never done anything as brave in any movie,” he later wrote.

Beginning in 1941, Douglas won a series of small roles on Broadway, served briefly in the Navy and received a key Hollywood break when an old friend from New York, Lauren Bacall, recommended he play opposite Barbara Stanwyck in “The Strange Love of Martha Ivers.”

He gained further attention as a tough guy in the classic 1947 film noir “Out of the Past,” although a more typical role was as a school teacher in Mankiewicz’s Oscar-winning “A Letter to Three Wives.” His real breakthrough came as an unscrupulous boxer in 1949’s “Champion,” a low-budget film produced by a then-little known Stanley Kramer that his agents disparaged.

“With dire warnings about my career and my future, they gave up on me, writing me off as just another crazy New York actor who didn’t know what he was doing,” Douglas recalled in his memoir “The Ragman’s Son,” published in 1988.

He had long desired creative control and “Champion” was followed by a run of successes that gave him the clout to form Bryna Productions (named after his mother) in 1955, and a second company later. Many of his movies, such as Kubrick’s “Paths of Glory,” “The Vikings,” “Spartacus” and “Seven Days in May,” were produced by his companies. Other highlights included the acclaimed crime drama “Detective Story” and the Oscar-winning adaptation of Jules Verne’s “20,000 Leagues Under the Sea.”

Douglas very much lived like a movie star, or even a king, in the pre-#MeToo era. Marriage and other commitments didn’t keep him from being romantically linked with many of his female co-stars, among them Gene Tierney, Patricia Neal and Marlene Dietrich. He would recall playing Ann Sothern’s husband in “A Letter to Three Wives” and how he and the actress “rehearsed the relationship offstage.”

Speaking to The Associated Press about Douglas in December 2016, less than a year before the #MeToo movement caught on, the actress and dancer Neile Adams lightheartedly said of her friend, “You could not sit beside him without his hand crawling up your leg.”

His first marriage, to Diana Dill, ended in 1951. Three years later, he married Anne Buydens, whom he met in Paris while he was filming “Act of Love” (and eagerly pursuing a young Italian actress) and she was a publicist.

He would later owe his very life to Anne, to whom he was married more than 60 years despite acknowledged tension over his infidelities.

In 1958, the film producer Michael Todd, then the husband of Elizabeth Taylor, offered the actor a ride on his private jet. Douglas’ wife insisted that he not go, worrying about a private plane, and he eventually gave in. The plane crashed, killing all on board.

Douglas had two children with each of his wives and all went into show business, against their father’s advice. Besides Michael, they are Joel and Peter, both producers, and Eric, an actor with several film credits who died of a drug overdose in 2004.

Later generations came to know Michael well. Michael Douglas not only thrived in Hollywood, but beat his dad to the Oscars with a project his father had first desired. Kirk Douglas tried for years to make a film out of Ken Kesey’s cult novel “One Flew Over the Cuckoo’s Nest.” In the 1970s, he gave up and let Michael have a try.

“My father has played up his disappointment with that pretty good,” Michael Douglas later told Vanity Fair. “I have to remind him, I shared part of my producing back-end (credit) with him, so he ended up making more money off that movie than he had in any other picture.”

“And I would gladly give back every cent, if I could have played that role,” the elder Douglas replied.

When his movie career faded, Douglas turned to other media. In the 1970s and 1980s, he did several notable television films, including “Victory at Entebbe” and “Amos.” His film credits in the ’70s and ’80s included De Palma’s “The Fury” and a comedy, “Tough Guys,” that co-starred Burt Lancaster, his longtime friend who previously appeared with Douglas in “Seven Days in May,” “Gunfight at the O.K. Corral” and other movies.

A stroke in 1996 seemed to end his film career, but Douglas returned three years later with “Diamonds,” which he made after struggling to overcome speech problems.

“I thought I would never make another movie unless silent movies came back,” he joked.

He would say he became more reflective in his 70s, especially after a 1991 helicopter crash that killed two other passengers, and began a prolific writing career. His books included “The Ragman’s Son,” the novels “Dance With the Devil” and “The Gift” and a short work on the making of “Spartacus.”

Douglas also was one of Hollywood’s leading philanthropists. The Douglas Foundation, which he and Anne Douglas co-founded, has donated millions to a wide range of institutions, from the Children’s Hospital Los Angeles to the Motion Picture & Television Fund. In 2015, the foundation endowed the Kirk Douglas Fellowship — a full-tuition, 2-year scholarship — at the American Film Institute.

In 2003, Douglas teamed with son Michael; Cameron Douglas, Michael’s 24-year-old son; and ex-wife Diana Douglas, Michael’s mother, for “It Runs in the Family,” a comic drama with a few digs worked in about the elder Douglas’ parenting.

In March 2009, he appeared in a one-man show, “Before I Forget,” recounting his life and famous friends. The four-night show in the Kirk Douglas Theatre in Culver City was sold out.

“You know, I never wanted to be a movie actor,” Douglas told the AP in 2009. “My goal in life was to be a star on the stage. Now I know how to do it. Build your own theater.” 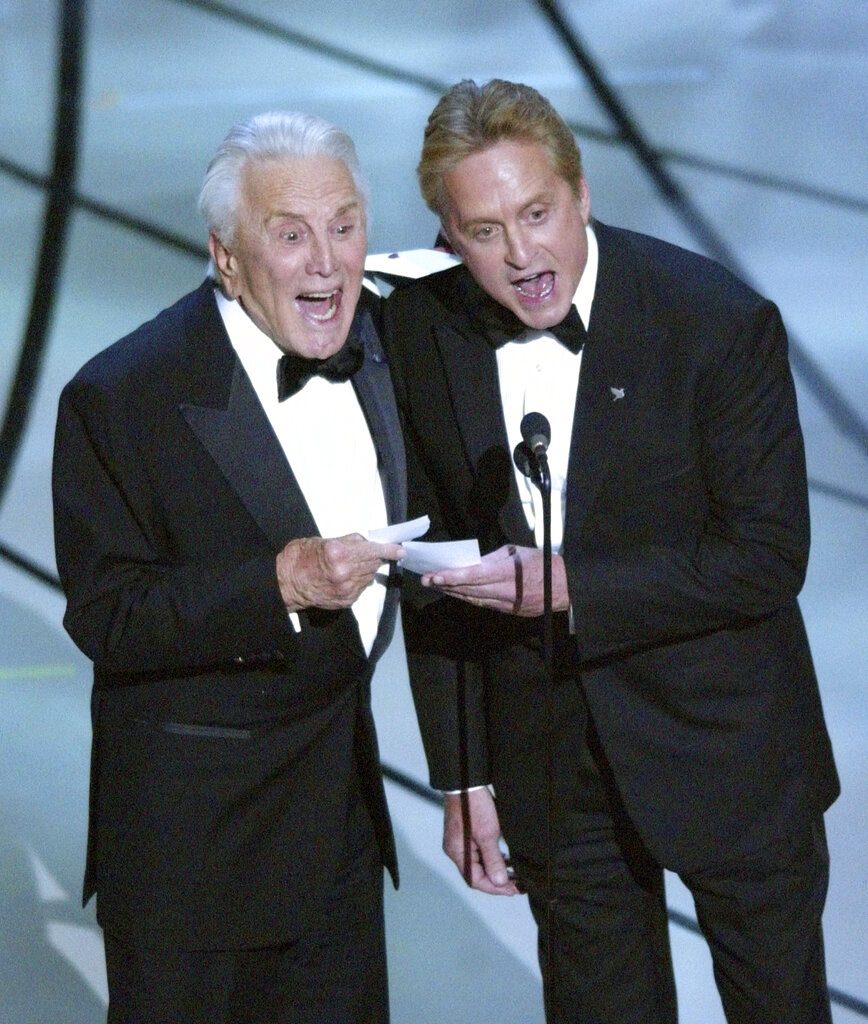 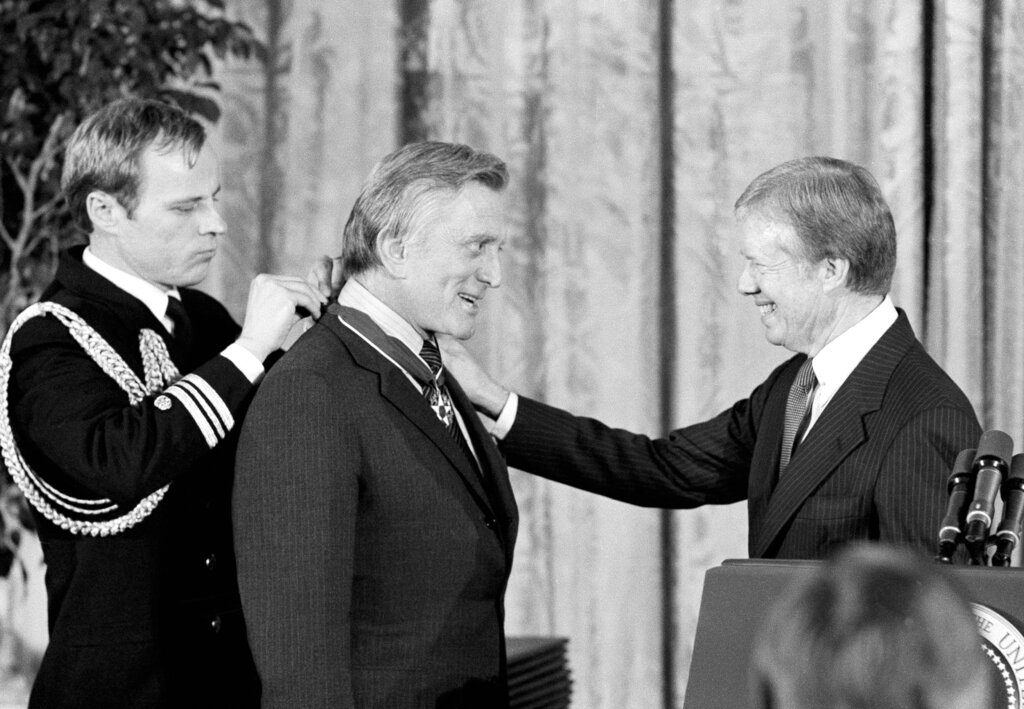 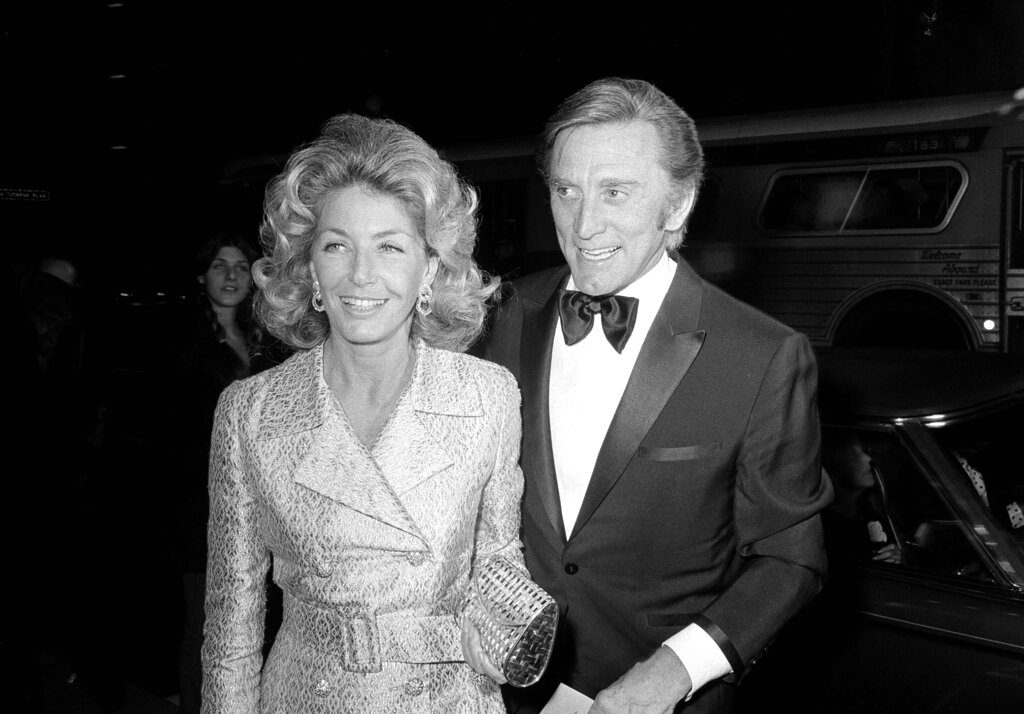 FILE – This Nov. 5, 1971 file photo shows actor Kirk Douglas and his wife Anne at the premier of “Fiddler on the Roof” in Los Angeles. (AP Photo/Harold Filan, File) 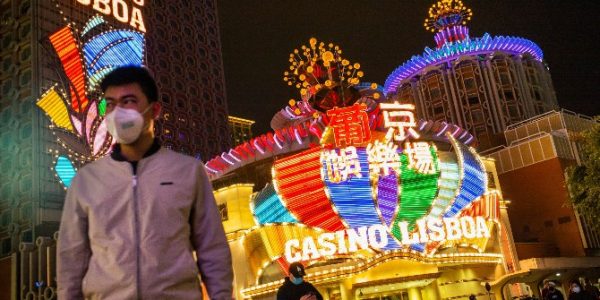 June gaming revenue to show another deep plunge
New case of Covid-19 in Macau, tally at 46 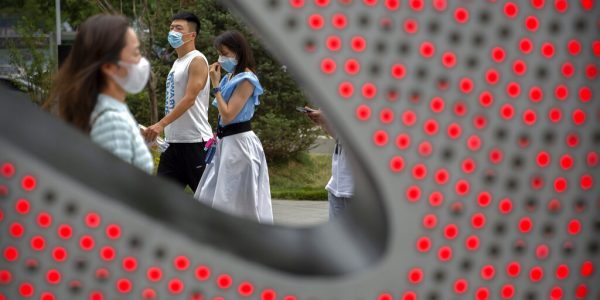