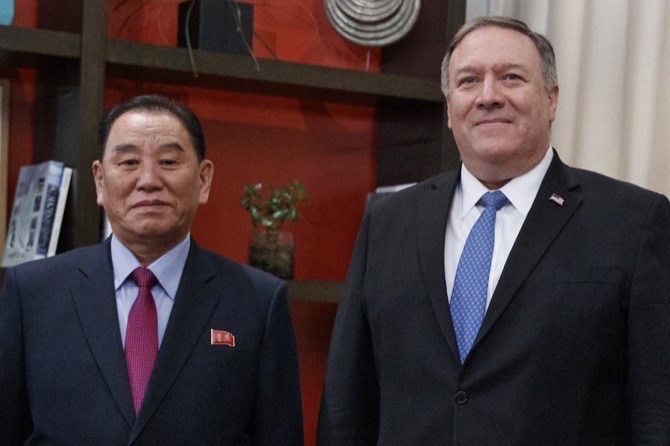 North Korean leader Kim Jong Un’s most trusted policy adviser apparently has been removed from one of his posts, a South Korean lawmaker said yesterday, a possible personnel reshuffle in the wake of the breakdown of the North Korea-U.S. summit in February.

The head of the South Korean parliament’s intelligence committee, Lee Hye-hoon, cited South Korea’s main spy agency as saying that Kim Yong Chol lost his Workers’ Party post in charge of relations with South Korea earlier this month. He was replaced by the little-known Jang Kum Chol as the director of the party’s United Front Department, Lee said.

Lee said she obtained the information at a private briefing from the National Intelligence Service.

His rise had baffled many North Korea watchers because he handled South Korea ties, not international or U.S. relations. Previously, he was a military intelligence chief believed to be behind a slew of provocations, including two deadly attacks in 2010 that killed 50 South Koreans and an alleged 2014 cyberattack on Sony Pictures. Both Seoul and Washington imposed sanctions on him in recent years.

The NIS and the Unification Ministry, a Seoul agency responsible for North Korea ties, said they could not immediately confirm the information on Kim Yong Chol.

The NIS has a spotty record in confirming developments in North Korea. But if confirmed, Kim Yong Chol’s replacement would add to speculation that he is being sidelined from nuclear diplomacy to take the responsibility for the failure of the February summit in Hanoi.

Kim Jong Un, who is desperate to revive his country’s moribund economy, returned home empty-handed from Hanoi after Trump rejected his calls for easing U.S.-led sanctions in return for dismantling a key nuclear complex, a limited denuclearization step.

“(Pyongyang’s) significantly diminished reliance on Kim Yong Chol is a very positive sign for the denuclearization negotiations between North Korea and the United States,” said Cheong Seong-Chang, an analyst at South Korea’s Sejong Institute. He called Kim Yong Chol “most responsible” for the second summit’s failure due to his hard-line stance. AP