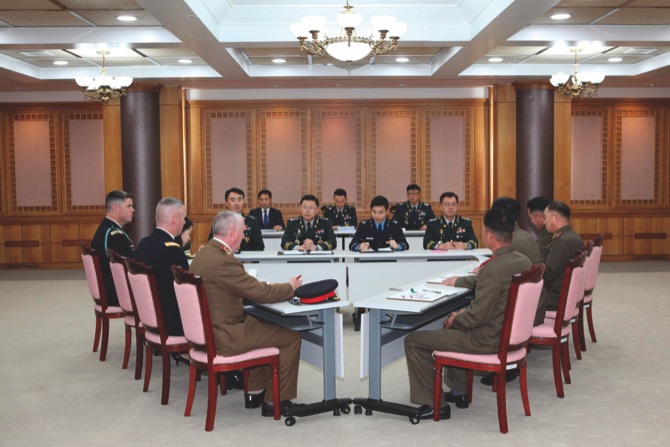 The U.S.-led United Nations Command (left) South Korean (center) and North Korean military officers attend a meeting at the southern side of Panmunjom in the Demilitarized Zone

The two Koreas have completed removing land mines planted at their shared border village as part of efforts to disarm the area located inside the world’s most heavily fortified border, South Korean officials said yesterday.

The announcement came following a meeting among military officers from the Koreas and the U.S.-led U.N. Command at the border’s Panmunjom village earlier. It’s the second such trilateral meeting to examine efforts to demilitarize Panmunjom, the most well-known place inside the 248-kilometer-long Demilitarized Zone that bisect the two Koreas.

Disarming the village was among a set of tension-reduction agreements signed by the Koreas’ defense chiefs on the sidelines of their leaders’ summit in Pyongyang last month.

As the next disarmament steps at Panmunjom, the two Koreas and the U.N. Command agreed on withdrawing weapons and guard posts there by Thursday. The three sides will then spend two days jointly verifying those measures, Seoul’s Defense Ministry said in a statement. The Koreas eventually aim to have 35 unarmed personnel from each side guard the village.

Panmunjom is where the armistice was signed. Numerous incidents of bloodshed and violence have taken place there since the war’s end, and rival soldiers face each other only feet away from each other at Panmunjom.

As part of the September deals, the two Koreas are separately clearing mines from another front-line area, where they plan their first-ever joint searches for the remains of soldiers killed during the Korean War. The Koreas also plan to establish buffer zones along their land and sea boundaries, and a no-fly zone above the border.

Also yesterday, officials from the Koreas met at their recently launched liaison office at the North Korean border town of Kaesong for talks on how to cooperate in forestry sectors. General-level officers from the Koreas are to meet for bilateral talks at Panmunjom on Friday to discuss more details about how to implement the tension-reduction deals, according to the South Korean Defense Ministry.

Seoul’s liberal government is pushing for greater engagement with North Korea, but U.S. officials say such moves should be in tandem with global efforts to denuclearize North Korea. Hyung-Jin Kim, Seoul. AP