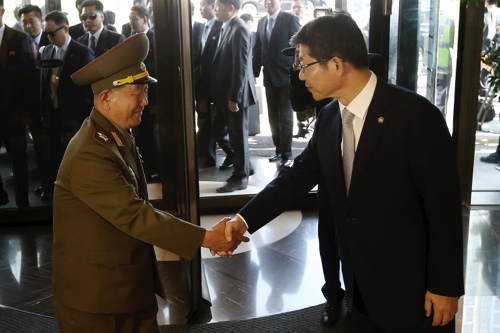 Naval boats of North Korea and South Korea exchanged warning fire near their disputed sea border in the Yellow Sea, days after high-ranking officials from both countries agreed to seek better relations.
South Korea’s navy fired warning shots at a North Korean patrol boat that crossed the Northern Limit Line that serves as the de facto maritime border between the two countries, South Korea’s defense ministry said yesterday. Both sides exchanged fire before the North Korean boat retreated to its own territorial waters. No casualties or damage were inflicted on the South’s navy, which fired about 90 shots in total, the ministry said.
While North Korean vessels do frequently cross the maritime border, yesterday’s incident jars with recent signs that North-South ties are improving. The top security advisers of North Korean leader Kim Jong Un and South Korean President Park Geun Hye met Oct. 4 and agreed to hold another round of high-level talks between the two sides later this month or next.
“The North’s firing may be a message that it will no longer remain quiet against warning shots from the South,” Chang Yong Seok, a North Korea researcher at Seoul National University’s Institute for Peace and Unification Studies, said by phone. “North Korea may also be testing how tough or soft South Korea is after the senior officials’ visit last week.”
The trip by Vice Marshal Hwang Pyong So and two other members of Kim’s inner circle marked the highest-level visit by North Korean officials to the South since 2009. It took place amid rumors about the health of the North Korean leader, who has been out of the public gaze for more than a month. South Korean media, including Yonhap News, reported he was suffering from gout. The North’s state television said last month he was experiencing “discomfort” in his body.
Park said Monday North Korea should ensure that relations between the countries do not relapse into the “vicious cycle” of worsening tensions. Seoul’s Unification Ministry said South Korea wants to discuss resuming reunions of families separated by the 1950-53 Korean War when high-level officials of the two sides meet for talks again. Sam Kim, Bloomberg