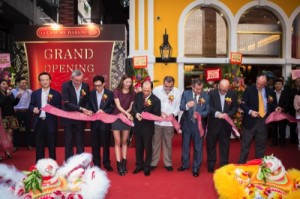 Aspect of the opening ceremony

Limited editions, Cuban vintage cigars, and 27 Cuban brands sit on the shelves of what its owner describes as the largest La Casa del Habano in Asia, which opened its doors this weekend in Macau. As the city’s demand for fine cigars increases alongside the development of the Chinese economy, the owner, Mr Leong Man Wai, stated that this is the right opportunity to open a La Casa del Habano flagship store in Asia’s gambling capital.
Located in Rua de Pequim, NAPE, La Casa del Habano also features a selection of fine liquors to complement the famed Cuban cigars. Witnessing a continuous growth in the cigar market, Mr Leong Man Wai, who owns three other retail outlets in Macau and also works in real estate, has decided to open yet another cigar store, this time focusing on particular products with the hope of “bringing a new experience to the cigar aficionados.”
La Casa del Habano is the international franchise store of famous brand Habanos S.A –
a mixed-ownership enterprise involving the state-owned Cubatabaco and the British company Altadis, based in Spain. There are over 140 stores across the globe that provide a wide assortment of Cuban cigars, including limited edition brands. The first international Casa del Habano opened in Cancun, Mexico, in 1990. 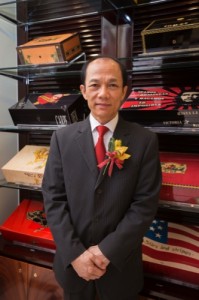 The owner believes that further growth will be experienced in the Macau market. La Casa del Habano, he said, seems like the solution to customers’ demands, as they “know exactly what they want.”
Chinese customers are looking for a selection of exclusive products. More importantly, they will be focusing on a particular range of clients looking for tailored service.
“La Casa del Habano is a retailer focusing on providing personalized attention to the cigar aficionados. In addition, we have one of the largest walk-
in humidors amongst over 140 franchised stores, which can provide the best cigar storage conditions,” he said.
Macau’s La Casa del Habano uses a traditional Portuguese style storefront design, to distinguish it from other brand stores across the globe.
Earlier this year, Cuban cigar officials said that sales of the island’s famous hand-rolled cigars rose around 8 percent in 2013. AP reported that Ana Lopez, a marketing executive with Habanos S.A., said that sales reached USD447 million in 2013, up from USD416 million the previous year.  Additionally, the company cited examples of growth in Asia and Middle Eastern markets.
Cuba is the world’s dominant producer of fine cigars. Although cigar smoking is believed to have taken hold in the Americas, it remains unclear where and when. A Time magazine feature recalls that Cuba’s fertile land and favorable climate enabled the production of several types of tobacco leaves to be harvested in the island and used in cigars.
Back in the 17th century, Columbus claimed Cuba for Spain and the Spanish ruled the industry, in a monopoly that lasted until 1817. In the 19th century, cigars’ popularity exploded across the globe, with the U.S. consuming about 300 million cigars.

Cigar aficionados paid over USD1.1 million last March for six handmade Cuban humidors, during the closing gala of Havana’s 16th annual Cigar Festival. Sales of Cuba’s famous cigars rose 8 percent in 2013, the BBC reported early this year. The jump was triggered by strong demand from Cuban cigar smokers in China, according to Habanos S.A. Europe remains one of the biggest markets for the famous hand-rolled cigars, but China and the Middle East have helped boost sales. The US market, however, continues to be off-limits for Cuban producers eager to sell their famed product, since Washington imposed an economic embargo on the communist island more than a half century ago.

Cigar: ‘The best ambassador of Cuba’

The Consul-General of Cuba in Guangzhou, Mr Félix Raúl Rojas, believes that a Cuban cigar is the best ambassador of his country, enabling Macau to better understand Cuba’s history and traditions. Attending the inauguration of La Casa del Habano on Saturday, the Consul-General stressed that since this  is the largest La Casa del Habano in Asia, it “is both a challenge and a perfect opportunity to bring both cultures closer together.” “A cigar is like a footprint of Latin America in the culturally rich Macau. I have visited other La Casa del Habano stores across the world, and this one in Macau is very special,” he stated. Mr Félix Raúl Rojas added that the way the store is designed brings not only a taste of Cuba, but also “a touch of the old Havana.”