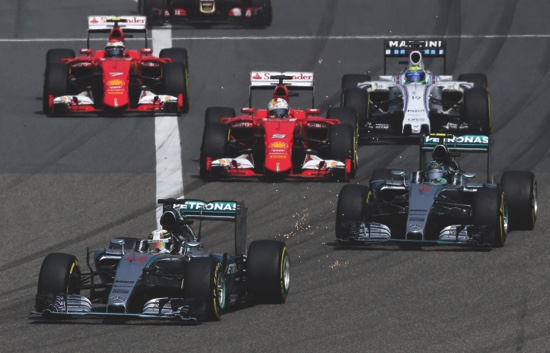 Lewis Hamilton put Mercedes back on top in Formula One, leading for most of the race yesterday to capture his fourth Chinese Grand Prix victory.
Hamilton made sure there would be no repeat of Ferrari’s surprising win two weeks ago at the Malaysian Grand Prix, conserving his tires to withstand a challenge by the Italian team’s Sebastian Vettel and easily capture the 35th win of his career.
Hamilton’s Mercedes teammate Nico Rosberg finished second and Vettel was third. “We knew that the Ferraris were very, very good with their long-run pace and also looking after their tires so today the real goal was to manage the tires and my goal was to look after my car,” Hamilton said.
Hamilton’s tire-conservation strategy ensured he could open up a sizeable lead over Vettel after the second pit stop, but a clearly angry Rosberg voiced frustration after the race that Hamilton had held him back as a result.
“It’s just now interesting to hear from you, Lewis, that you were just thinking about yourself with the pace in front and unnecessarily that was compromising my race,” he said.
Hamilton responded afterward by saying he didn’t intentionally try to impede his teammate.
“It’s not my job to look after Nico’s race. My job’s to manage the car and bring the car home as fast as possible,” he said. “If Nico wanted to get by, he could have tried.”
The race came to an anticlimactic conclusion after Max Verstappen’s Toro Rosso car stopped on the track toward the end of the track and the drivers completed the remaining two laps behind the safety car. Hamilton had a comfortable five-second lead over Rosberg when the safety car came out, with Vettel another 10 seconds back.
The safety car may have come out just in time for Vettel, who was barely ahead of Ferrari teammate Kimi Raikkonen at the end of the race. Raikkonen had to settle for fourth, just missing his first podium finish since the Singapore Grand Prix in 2013.
The Williams cars of Felipe Massa and Valtteri Bottas were fifth and sixth, respectively, followed by Lotus’ Romain Grosjean, Sauber’s Felipe Nasr, Red Bull’s Daniel Ricciardo and Sauber’s other driver, Marcus Ericsson. AP