Light Festival to dazzle in new locations with mapping shows 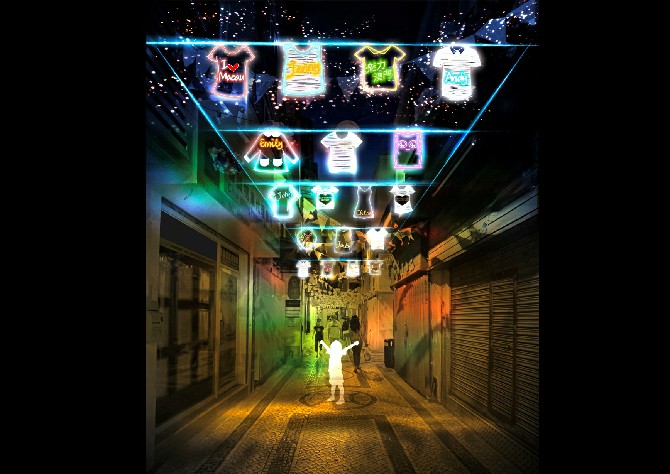 The annual Macao Light Festival is set to showcase a series of projection mapping shows across the community from December 4 to January 2, 2022, weaving “tourism + culture and creativity.”
Announced during a press conference yesterday, the festival themed ’Travellers from Mars‘ will see four different projection mapping shows presented by performance teams from Macau, Hengqin, Changsha and Tokyo, dazzling upon different unique architectures and travel attractions.
Sprawling across different local streets and lanes, the festival will illuminate new locations such as the Macao Science Center and Barra Pier from 7 p.m. to 10 p.m.
The Macao Science Center will become a new place to experience projection mapping in the city, while project mapping will dazzle the Chapel of St. Francis Xavier in Coloane as a new show venue for the festival this year.
The Macao Government Tourism Office (MGTO) once staged mapping shows at the Chapel of St. Francis Xavier and other locations to celebrate the 15th Anniversary of the Establishment of the Macao SAR in 2014. Largo do Pagode do Bazar at the Central District and Largo dos Bombeiros in Taipa, on the other hand, had both served as mapping show venues in the past editions of the Macao Light Festival.
MGTO’s Director Maria Helena de Senna Fernandes estimates that the number of tourists to be similar to last year, which is 250,000.
The total expenditure expected for the event is about MOP18.9 million, about 9.5% lower than last year, given that fact that the show is six days shorter.
Last year, the “Macao Light Festival 2020 – Light Carnival” was held earlier than usual starting from September 26 to October 31, with a total budget of MOP21 million. The event was held a few days after China reinstated tourism visas to Macau from September 23, 2020.

No fireworks on NYE
The SAR government will not host any fireworks show this year, similar to its cancellation last year. However, the SAR government is considering to have one during the Chinese New Year.
“We understand that for fireworks, there are more restrictions set by the Mainland that’s why we do not have the New Year’s Eve fireworks,” Fernandes explained.
Last year, the government had cancelled fireworks shows including the international fireworks competition to avoid crowding and reduce Covid-19 pandemic risks.

The Macao Government Tourism Office (MGTO) is confident that it will exceed six million tourist arrivals this year, noting that the city has seen some 30,000 arrivals last Friday.
Last year, the city saw 5.9 million tourist arrivals, a plunge of 85% from the year prior due to the disruption to travel and tourism around the world, amid the Covid-19 pandemic.
Initially, the MGTO had forecasted up to 10 million arrivals.
“At least right now we should be able to pass six million. If it’ll reach seven million, I’m not sure. But if we do have seven million, it will be slightly higher than last year,” said MGTO’s director Maria Helena de Senna Fernandes.
“I hope that this week, with the food festival and the Grand Prix, this will attract more visitors to Macau,” Fernandes added.