Lollapalooza marks a decade in Chicago 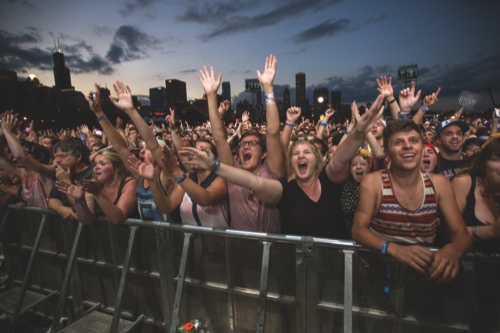 Once the vagabond of the music festival and touring circuit, Lollapalooza marks its 10th anniversary in Chicago when it opens for three days starting tomorrow with a lineup including Eminem, Outkast and Kings of Leon.
“We are very into the idea of being an international music event,” Lollapalooza founder Perry Farrell said in a recent interview. “But I would have to acknowledge that if it were not for Chicago, that beautiful showroom, I don’t think we would be in the position we’re in now.”
Farrell, the leader singer of Jane’s Addiction, started Lollapalooza in 1991. It was a tour until 1997 before a hiatus until 2003. There were struggles in 2004 when the event was canceled just weeks before it was to get underway because of poor ticket sales. But in 2005, Lollapalooza came to Chicago’s lakefront Grant Park where it hosted several dozen musical artists on five stages over two days. The headline in the Chicago Tribune the day after the festival ended read: “Successapalooza.”
Its second year in Chicago, Lollapalooza grew to about 130 acts on nine stages with capacity for 75,000 people. This year promoters expect 100,000 on each day with as many acts on eight stages. The festival has grown over its years in Chicago, adding food tents with offerings from gourmet chefs and a children’s section. And it has brought acts like Lady Gaga, Nine Inch Nails, the Red Hot Chili Peppers and Coldplay to town.
Eventually, Lollapalooza became the basis for the modern festival culture and circuit that has evolved since, including events like Bonnaroo, Coachella and a legion of smaller multiday parties. This year, Lorde, Skrillex, Calvin Harris and Nas are part of the jam-packed lineup.
Chicago city leaders decided in 2005 to let Lollapalooza take over its beloved Grant Park. They now say it was a wise decision, benefiting the city both culturally and financially.
“It’s become a global image-builder for Chicago,” said Don Welsh, president and chief executive officer of Choose Chicago, the city’s tourism and convention organization. “Lollapalooza has become synonymous with Chicago.”
Last year, he said, the organization estimates Lollapalooza’s economic impact on Chicago was USD140 million. This year for the first time the city and Lollapalooza promoters worked with tourism partners in international markets to make tickets available for music fans around the world.
And Chicago Park District officials say festival proceeds have gone to pay for park improvements and educational and cultural programs.
With an event this large, things haven’t always been perfect. A thunderstorm moved across Chicago in 2012 and shut down Lollapalooza, forcing promoters to shuffle the lineup. And at least twice parkland was muddied and damaged after the festival, but the promoters paid for repairs.
From his point of view, Farrell says Chicago offers him “no plug-ups or bottlenecks.”
“Just being in the presence of Chicago we look damn good,” Farrell said. “I have nothing but praise and adulation and I want to do Chicago right.” AP