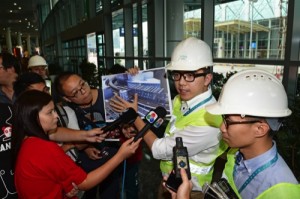 Cheang Kuai Hou and Wong Sio Leong, from the GIT

The pedestrian overpass currently connecting the Hotel Golden Crown China to the Macau International Airport will be demolished so that a Light Rail Transit (LRT) station can be built. Construction works are due to begin today, if the weather allows it, the Transportation Infrastructure Office (GIT) stated on Monday.
Traffic will be provisionally diverted while the demolition works take place.
The overpass in front of the Macau International Airport will be closed to traffic for three days, as the demolition will involve the removal of a 30-ton structure. Instead, cars will have to go through the tunnel located in Avenida Wai Long. Demolition works take place overnight between 10:00 p.m. and 6:00 a.m.
GIT’s functional chief, Mr Wong Sio Leong, said that his department does not have concrete data on the budget for now.
The pedestrian overpass belongs to the Hotel Golden Crown China, which has not requested any compensation from the government following the demolition. According to GIT, an agreement between the hotel and the government had existed “for quite some time.”
GIT’s functional chief told reporters that another pedestrian overpass is not due to be built on site in the future.
GIT recognized that demolishing the pedestrian overpass is a complex project, and that traffic will be affected, since the LRT station is also under construction. They point out that Avenida Wai Long is one of the main avenues in Taipa experiencing heavy traffic flows, particularly because it is the main road used to access the Macau International Airport.
The overpass located in front of the airport will be closed to traffic between 10:00 p.m. and 6:00 a.m., while demolition works are ongoing. GIT recognized that this implies the use of heavy machinery, and so time management will be crucial to ensure that the overpass will be re-opened in the morning.
The pedestrian overpass has to be demolished, so that the LRT station, featuring 20 pillars and an overpass, can be completed.
The airport LRT is due to be completed within six to eight months. This LRT segment comprises three stations (Macau University of Science and Technology, Macau International Airport and the Taipa Ferry Terminal) within a 3.1-kilometer stretch.