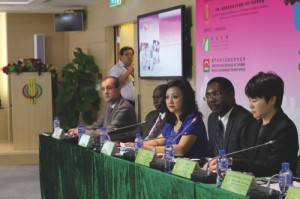 Theatre companies from Brazil, Angola, Cape Verde and Guinea Bissau will be performing in Macau between October 21 and 26, as the 6th Cultural Week of China and Portuguese-speaking Countries begins. Organizers unveiled this year’s program at a press conference held yesterday.  For the first time, the program includes theatre performances from the Lusophone world.
Organized by Forum Macau, in cooperation with the Civic and Municipal Affairs Bureau (IACM) and the Macau Government Tourist Office (MGTO), the Cultural Week of China and Portuguese-speaking Countries takes place between October 21 and 30, bringing chefs, artists and handcrafters to town, all looking to provide a glimpse of their country’s cultural features.
During the press conference, deputy secretary-general of the Permanent Secretariat of Forum Macau, Ms Rita Santos, revealed this year’s edition had a budget of over MOP9 million, an 18 percent decrease from the previous year when Forum Macau celebrated its 10th anniversary.
The IPOR (Portuguese Institute of the Orient) has also collaborated with Forum Macau in this edition, particularly in helping with bringing in theatre companies. IPOR’s director, Mr João Laurentino das Neves, explained that this week is intended as an opportunity for different cultures to come together. Theatre ultimately presents itself as a reinforcement of the program that can improve the sense of a cultural community.
After choosing to bring theatre companies from four of the Portuguese-speaking countries, organizers are considering bringing theatre groups from other Lusophone nations in coming editions.
Theatre performances will take place between October 21 and 26 at the D. Pedro V theatre.
As per last year, the program includes a gastronomy event called“Flavors of the World,” which features traditional dishes prepared by five chefs coming from Angola, Brazil, Timor, São Tomé e Príncipe and Macau. The gastronomy event will take place between October 24 and 30 at the Macau Tower’s restaurant 360° between 11:00a.m. and 15:00p.m. and 6:30 p.m. and 10:p.m.
A contemporary art exhibition, a photography contest, and a handicraft fair are among the other events in the program. Performances by dancers, singers and bands from China and the Portuguese-speaking countries will be held in Senado Square between October 21 and 23. Diabo da Cruz (Portugal), Boy G Mendes (Cape Verde), Goenchim Noketram (Goa, Damon and Diu) Marina de la Riba (Brazil), Zé Maria Boyoth (Angola, Ego Lemos (Timor) and Os Vibrados (S. Tomé) will perform. These bands are also expected to perform during the 17th  Lusofonia Festival to be held between October 17 and 19.