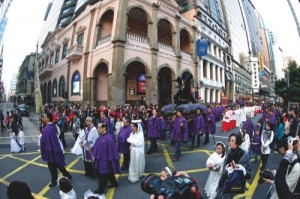 The Macau government generally respects religious freedom, the U.S. Department of State has concluded in its International Religious Freedom Report for 2013, published annually by the Bureau of Democracy, Human Rights and Labor.
The document, which the Times has accessed, shows that there were no reports of societal abuses or discrimination based on religious belief, affiliation or practice throughout 2013.
In order to conduct a report on the territory’s religious freedom, the U.S. Consulate General in Hong Kong and Macau met with leaders of religious groups and spiritual organizations in the region, along with scholars from the University of Saint Joseph.
U.S. diplomats found that government practices, legal frameworks and policies contributed to the protection of religious freedom.
The report notes that Macau’s government has provided financial support to schools, childcare centers, clinics, and homes for the elderly, regardless of their religious affiliation.
Legal frameworks and policies also work towards maintaining respect for religious freedom, according to the report.
“Under the Basic Law, the government of the Macau SAR, rather than the central government of the People’s Republic of China, safeguards religious freedom in the SAR. Religious groups coordinate their relations with co-religionists in the PRC through the Central Government Liaison Office (CGLO). The CGLO also maintains dialogue with religious groups in the SAR,” it reads.
Furthermore, the report emphasizes that a diploma on freedom of religion includes the rights to privacy of religious belief, freedom of religious assembly, freedom to hold religious processions, and freedom of religious education.
“The law also stipulates that religious groups may develop and maintain relations with religious groups abroad. (…) The Vatican appoints the bishop for the diocese,” diplomats added.
U.S. diplomats have also assessed the status of societal respect for religious freedom, concluding that there were no reports of societal abuses or discrimination based on religious beliefs, affiliations or practices.
“Relations among the various religious groups were good, and citizens generally were tolerant of the religious views and practices of others. Many religious groups, including Catholics, Buddhists, Protestants, and Bahais, provided extensive social services.”
It was also noted that public ceremonies and dedications often included prayers by Christian and Buddhist groups.
“The private University of Saint Joseph, which is affiliated with the Catholic University of Portugal, offers a Christian studies course that includes Catholic seminary students from the mainland,” they wrote.
The International Religious Freedom Report for 2013 also examined mainland China, where the situation is different. U.S. diplomats noted that the constitution states that citizens can enjoy “freedom of religious belief”, but it limits protection for religious practices only to “normal religious activities.”
Furthermore, the U.S. diplomats stressed that the mainland government has restricted religious freedom.
Officials argued that there was also societal discrimination based on religious affiliation, belief and practice. They stated that religious and ethnic minority groups such as Tibetan Buddhists and Uighur Muslims experienced institutionalized discrimination throughout the mainland.  CP