Mainland doctors: What we need is respect and understanding 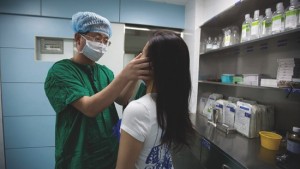 Frustration, misunderstanding and dissatisfaction are the new characteristics of doctor-patient relations in China, often resulting in violence.
To Doctor Qin in south China’s Guangxi Zhuang Autonomous Region, that tension brought burns to 34 percent of his body, and will probably lead to permanent disfigurement.
Qin, 54, with the radiotherapy department of the First Affiliated Hospital of Guangxi Medical University, was attacked on Tuesday morning, when a patient poured gasoline on him in a hospital lift and lit it, according to local police.
Qin is currently in intensive care, and doctors say his condition does not look good.
Even after he is out of danger, the burns will definitely disfigure him, said Tang Weizhong, deputy head of the hospital.
“He said to me in pain, ‘What have I done to deserve this?’” said Tang. “Qin is a good and well respected doctor. He shouldn’t have gone through this ordeal.”
The incident sent shockwaves throughout the hospital, with many angry staff contacting Tang to express their anger and fear.
“Doctors are feeling increasingly insecure after all these incidents,” Tang said.
Police said that the suspect, surnamed Wang, had received treatment in Qin’s department three years ago after being diagnosed with nasopharyngeal cancer.
Only a week ago, a man named Zhang attacked a nurse on duty at the First Affiliated Hospital of Kunming Medical University with a knife.
While doctors are fretting over their troubled relationship with patients, the patients also have their grievances, having long complained about the difficulty of seeing doctors and obtaining proper treatment.
Guo Yufen, a public health official in northwest China’s Gansu Province, said that one of underlying reasons is uneven distribution of medical resources.
Patients flood into big hospitals where quality medical equipment and good doctors converge, which inevitably slashes consultation times and mars doctor-patient communication, creating problem-prone medical relationships, said Guo.
The dissatisfaction has fueled resentment in both doctors and the sick. According to the National Health and Family Planning Commission, there were 115,000 medical disputes in 2014.
As urgency for change mounts, authorities at various levels are struggling to assuage public ire, although the results have been less than satisfactory.
In a poll published in May by the Chinese Medical Doctor Association, some 13 percent of the 12,600 doctors said they were physically assaulted by their patients last year, with nearly 60 percent having been verbally abused. Sixty percent of doctors said they have low job satisfaction, and 64 percent do not want their children to become doctors.
Tang Weizhong wants the public to adopt a better attitude toward medical staff, adding that not all patients are easily cured, but that does not mean doctors do not want to save lives. He added that patients should have “reasonable expectations” for doctors.
“We are not just doctors, we are also people,” Tang said. “And respect and understanding are what we, as human beings, need.” Xinhua