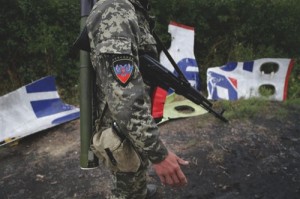 A Pro-Russian rebel stands beside pieces of the Malaysia Airlines Flight 17 plane near village of Rozsypne, eastern Ukraine

Malaysia Airlines Flight 17 was likely struck by multiple “high-energy objects from outside the aircraft,” causing it to break up over eastern Ukraine, a preliminary report into the deadly aviation disaster concluded yesterday.
The report by the Dutch Safety Board stopped short of saying the Boeing 777 was shot down by a missile, but its findings appear to point to that conclusion. It also did not say who might have been responsible.
The Boeing 777 suddenly plunged out of the sky July 17 over pro-Russian rebel-held territory in Ukraine, killing all 298 passengers and crew on board.
“The damage observed in the forward section of the aircraft appears to indicate that the aircraft was penetrated by a large number of high-energy objects from outside the aircraft,” the report said. “It is likely that this damage resulted in a loss of structural integrity of the aircraft, leading to an in-flight break up.”
The board is leading the international investigation into the cause of the disaster. Its full report is expected within a year of the crash.
“The initial results of the investigation point toward an external cause of the MH17 crash,” the board’s chairman, Tjibbe Joustra, said in a statement. “More research will be necessary to determine the cause with greater precision. The Safety Board believes that additional evidence will become available for investigation in the period ahead.”
Christopher Yates, an aviation safety specialist at Yates Consulting, told the AP the report “is extremely consistent with damage from a missile for the simple reason there are penetration marks.
“It must have been moving at very high velocity to create the damage,” he said. “It could only be a missile of the type that would reach the altitude that would have struck the aircraft, potentially a BUK missile.
He said the report gave no indication whether the missile had been fired from the ground or from another aircraft, but it likely came from the ground as there were no military aircraft known to have been flying at the time. The missile could not have been shoulder-fired because it would not have reached the necessary altitude, he added.
Because of the ongoing conflict between pro-Russian rebels and Ukrainian forces, investigators from the board have not visited the fields where the wreckage of Flight 17 plunged to the ground. That likely contributed to the board’s cautious assessment of what happened.
“Detailed examination of the structural damage is ongoing,” the report said. “Forensic examination will be performed if the wreckage can be removed.”
Investigators so far have studied photos of the crash site, radar data and information gleaned from the downed jet’s “black boxes” — its cockpit voice recorder and flight data recorder. They all indicated that there was no technical fault that may have caused the plane to disintegrate.
Pro-Russian rebels officially deny having shot down the plane, but unofficially one senior rebel admitted they were behind a missile strike. Mike Corder, The Hague, AP